Faradair BEHA, an Electric Triplane for the Future

Triplanes were popular in World War One because they allowed great maneuverability for dog-fighting, a supreme survival necessity.  Their success in designs by Fokker and Sopwith, among others, gave them a certain panache.  Now, a Bristol, England-based company hopes to revive the triplane as a commuter aircraft ready to fly from regional airports.

Triplanes – not just an antiquated bit of nostalgia

Faradair®, named after English physicist Michael Faraday*, hopes to craft an airplane that will allow flight from smaller regional airports and compete with even well-established rail service.  Their craft, BEHA – Bio-Electric Hybrid Aircraft, will fly six to eight lucky passengers on a quiet inter-city ride powered by a 300-horsepower internal combustion engine and two electric motors in a parallel-hybrid arrangement.

Neil Cloughley, Managing Director and Founder of Faradair, wants to return Britain’s regional air services to a point where they were between WWI and WWII, when a small group of passengers could board a DeHavilland Dragon Rapide for a leisurely and sight-filled journey over England’s green land.  Cloughley notes the passing of regular national air service with this hoped-for result of his new airplane design: “But most importantly, we remember the likes of the de Havilland Dragon Rapide and Dove, these were early airliners that carried passengers between cities more regularly than aircraft operate today and yet these aircraft operated over 80 years ago.  So all of us at Faradair believe that we need to return to the skies on a regional basis, to improve quality of life, reduce congestion, reduce journey times, reduce emissions thereby increasing competition and choice within commuter networks to lower costs.”

The web site explains, “In the UK between 2015 and 2016, 4.5 million rail journeys were made per day, delivering over £9billion in revenue, as compared to just over 56,000 passengers using air terminals each day for national or domestic flights.”  Faradair concludes, “We can do better.”

They are intent on producing a “clean sheet” 300-horsepower engine that can run on Jet-A or biofuels, with all the reliability of conventional aircraft engines and at similar prices.  This unit will be teamed with twin electric motors which will produce an additional 300 horsepower.

Batteries will be a small part of the package, enabling only ten minutes power on their own, a bit like smaller hybrid packages such as Axter and several similar systems of varying sizes.

Electric takeoffs could hush operations to make them amenable to close-in urban airports, and provide a safe let-down if the ICE failed for some unforeseen reason, much like the Axter and other hybrids.  The fixed landing gear removes one item from the landing checklist in emergencies.

A Staggering Arrangement of Wings

One advantage biplanes and triplanes have is that their wings can be staggered, offset along the fuselage to prevent aerodynamic interference between the pressure distributions of upper and lower wings.  It also helps locate the center of gravity in the most advantageous spot.  Usually, the wings have different angles of attack (decalage) to allow them to stall at different speeds.  This provides an early stall warning and a gentle break, wing by wing before all lift is lost. 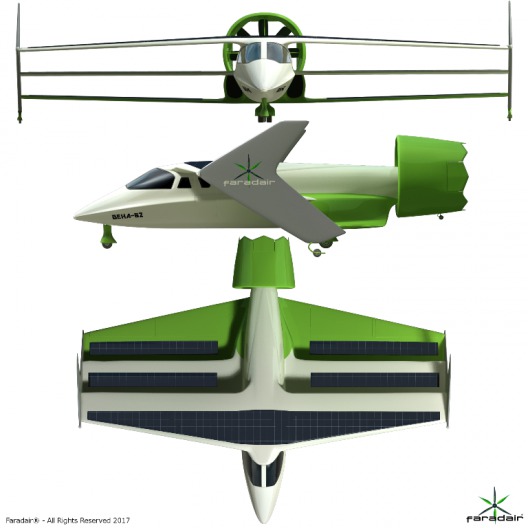 The three wings of the BEHA are positively staggered (top wing foremost, lowest wing rearmost) with ample space for their solar cells to collect rays while the wings operate in mostly undisturbed airflow.  Flights in several biplanes have convinced your editor that decalage provides a stable pitch “feel” to the airplane.

With a projected cruise speed “faster than a Chinook helicopter” (165 knots or 190 mph), BEHA should have excellent slow-speed capabilities.  “The aero engineers and professors at Cranfield University were surprised at the configuration performance capability, especially with the impressive slow speed flight capability and low stall speed characteristics.  The airframe is currently in the final phases of airframe optimization and the results will be revealed in the next 12 months.”

“Shrouding” the propeller in a duct that can also vector thrust sideways or up and down, the tail section augments thrust and adds pitch and yaw control.  The ducting may reduce propeller noise and make the airplane’s passage a quiet one. 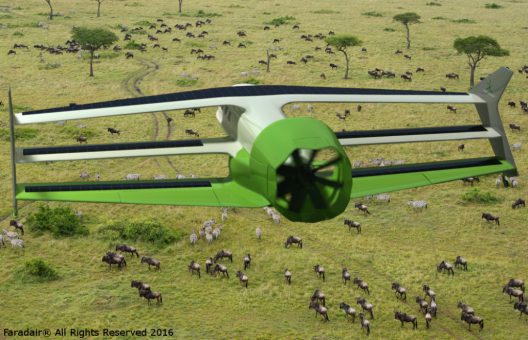 Beyond its planned role in commuter flight, BEHA could be useful for sneaking up on poachers and performing other wildlife conservation functions.  It might also find favor as a VIP transport, or for uses in police work, or on floats as a low-cost alternative to helicopter transport to oil rigs.  The designers see a larger variant holding up to 30 passengers and providing longer-range trips.

Certainly, the idea of regional, low-hassle flights has occurred to many designers, and we’re seeing the potential for a highly-competitive market in this arena.  BEHA is an interesting addition to this renewed market.

*Wikipedia lists the following attached to the inventor’s name:

Next post: Hoversurf and OTSAW Patrol the Skies of Dubai