Five Phase 2 winners exemplify the open rule-book approach around which the contest is organized.  Lighter explained it two years ago in an NPR interview.  “What the device looks like and how it works is up to the innovators.  We do not mandate that it’s something you get into like a car, or something that you strap on your back, or something that you stand on. We don’t want to say that there is any right way of doing it, since that only limits the possibilities.”

The five Phase II winners receive $50,000 each to enable further development of their machines and to prepare them for the Phase III flyoff late this year.  The five come from Russia and Latvia (one team), The Netherlands, Texas, Florida, and California.  Configurations are based on the contest ideas of compactness, quietness, and the ability to land and take off in a constrained area and safely carry an individual 20 miles.

The Teams and Their Flying Machines

Team Aeroxo’s Russian and Latvian members have created what they call an ERA Aviabike, although it’s hard to see the “bike” part other than in the probably uncomfortable seating position.  Aviabike might be the most complex of the entries, too, with 16 pivoting ducted fans providing vertical takeoffs and landing and relatively high-speed forward flight.

DragonAir benefits from a head start it got over the competition.  Mariah Cain, the only female captain on the five finalist teams, had experience on those water-powered hoverboards one sees on TV commercials and stunt shows.

According to FastCompany, “She also discovered Jeff Elkins, an engineer and inventor building hydroflight gear. ‘We became good friends,’ says Cain, ‘and then he realized I was the perfect size to fly his pet project, which is the AirBoard.’ It maneuvers similarly to a hydroflight pack. Sensors that measure a pilot’s movements allow them to simply lean in the direction they want to go.”  Ray Brandes is the third member of the small team.  Still, one hopes that Mariah’s feet are securely fastened to the platform.

Team Silverwing Personal Flight’ S1 pivots on its axis, making a 90-degree transition from vertical takeoff and landing orientation to horizontal cruise flight.  The team describes it as able to, “take off vertically carrying a person, fly for 30 minutes, and land in an area the size of a parking space.”

The SI is a canard-wing configuration around a person in motorcycle-like orientation powered by two electric motors with ducted rotors. The aircraft makes a 90-degree transition from vertical take-off to horizontal cruise flight and the pilot goes from vertical to prone during the transition..

The Texas A&M Harmony team has demonstrated a large-scale version of its Aria, a “high-TRL [Technology Readiness Level] compact rotorcraft designed to minimize noise and maximize efficiency, safety, reliability, and flight experience.”  The pilot remains upright throughout the flight, and the large, counter-rotating propeller should achieve the goal of being relatively quiet.

Trek Aerospace, Inc.’s| FlyKart2 is a more sophisticated version of the prototype FlyKart built in 2017 by Robert Bulaga and Joshua Portlock – in about one week.

Trek Aerospace specializes in what they call shrouded propellers and is designed to be inexpensive to build, own, and operate.  They’ve obviously taken a great deal of consideration to shield the pilot from the propellers, a great safety consideration. 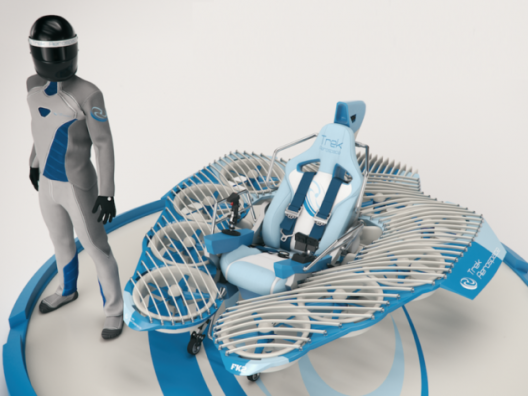 We wish the best of luck to all the competitors.  They’ve certainly enlivened interest in personal flight.