Kittyhawk, a bay area firm possessed of wildly creative talent, has crafted the Flyer in 2017, the Cora in 2018, and just announced the Heaviside, a cross-country cruiser named for a physics and electronics genius.  Its predecessors go back further, to the JobyMonarch, a single-seat, eight-motor design that made it to the construction stage.  That aircraft was based on Windward Performance’s Duckhawk sailplane, a high performance machine that made the most of its sleek lines.

Joby had several projects going at the time, including an energy-generating kite business that merged with Makani.  Carmel deAmicis does a good job of synthesizing a long series of inventions that help lead to Heaviside.  “After Joby Energy succeeded at creating airborne vessels that could generate energy from wind, it merged with Makani, a wind power company which Google recently bought. Before the merger, a group of engineers decided to use the technology developed on the turbines to build an aircraft that could hover like a helicopter and fly distances efficiently like a plane. Thus, the incubator (and its first startup, Joby Aviation) was born. 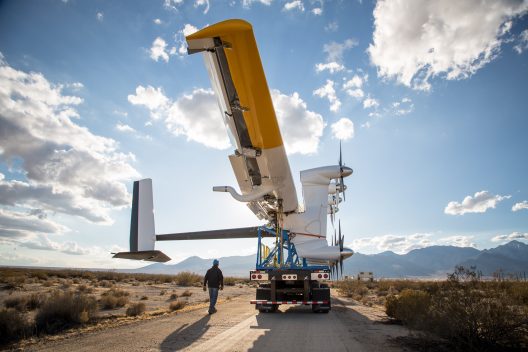 Sebastian Thrun and Damon Vander Lind, a physicist and electrical engineer, head the Heaviside effort for Alphabet, the Google-owned tech giant.  “Vander Lind, who earned his pilot’s license, commutes part of the way to work in a single-piston engine aircraft he fixed up. He takes a bicycle for the remainder of the journey. The physicist and electrical engineer, who was a lead engineer at the Alphabet-owned airborne wind turbine company Makani Power, notes that his commute, while fun, is hardly practical.”

Heaviside would make commuting, even to the remote hills where test flying takes place, a more practical reality.  Its six rotors mounted on the 20-foot wings and paired on the canard, “allow it to take off and land vertically before shifting to horizontal flight, negating the need for a runway. Kitty Hawk says that the aircraft is capable of traveling from San Francisco to San Jose in 15 minutes, a distance of around 30 miles (48 km), which would make for an average speed of 120 mph (192 km/h).”

Similarities to Joby’s Monarch and the electricity-generating kites show some of Heaviside’s design heritage, and the option to manually pilot this little machine would probably add a great deal of joy to the prospect. 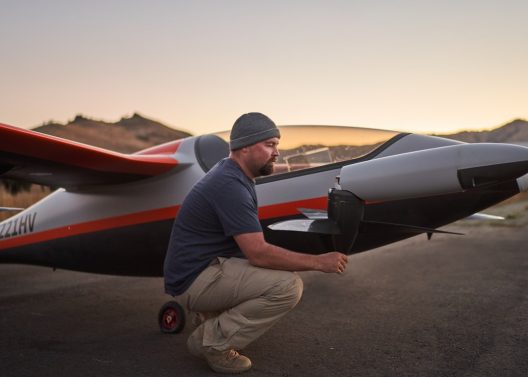 TechCrunch reports the average commute takes 53 minutes, according to the U. S. Census Bureau.  Heaviside would reduce a ground-bound 231 hours per year to a mere 21 hours of much more enjoyable transit.  Its low noise signature would allow neighbors to enjoy watching it depart and fly over, even though it registers 80 dBa briefly on liftoff before reducing its audible presence to a low 38 dBa.

The team continues work on fault and failure-proofing the craft, and has enlisted Mike Huerta, who served as FAA Administrator from 2013 to 2018, as an adviser on regulatory matters.

For What Is Heaviside Named ?

For whom, actually.  Oliver Heaviside was an English polymath, according to the American Physical Society, who gave us the Heaviside Step Function. Used in “control theory and signal processing, … it represents a signal that switches on at a specified time and stays on indefinitely.”