NASA is investigating “the integration of nanoelectrofuel (NEF) flow batteries with rim-driven electric motors to produce a safe, clean and quiet propulsion system for aircraft,” according to Aviation Week.

That is the promise of an early-stage rechargeable liquid battery technology under investigation by NASA. The agency is researching the integration of NEF flow batteries with rim-driven electric motors to produce a safe, clean and quiet propulsion system for aircraft.  The rim-driven motors are used on boats as thrusters, and may have applications on small unmanned aircraft, although researchers have seen disappointing results so far.

Tying these motors to more promising research into” non-explosive energy storage technology” is part of NASA Armstrong Flight Research Center’s Aqueous Quick-Charging Battery Integration for Flight Research (Aquifer) project, along with NASA Glenn Research Center’s co-principal investigation.  A spin-off of research at Argonne National Laboratory and Illinois Institute of Technology, Influit Energy has “developed a novel type of rechargeable battery that features active energy-storing materials in pumpable liquid form, which essentially allows us to use batteries in the same fashion as gasoline-powered engines.”

A TED Talk by Influit Founder & CEO John Katsoudas shows the design philosophy behind their battery and the direction planned for the technology.  Co-founders Elena Timofeeva, Chief Operations Officer and Director of R&D; and Carlo Segre, Chief Technology Officer, round out Influit’s leadership.

Influit claims their nan0electrofuel (NEF) flow battery can achieve one-and-one-half times the energy density of lithium-ion batteries at one-half the cost.  A primary feature, “rapid charge refueling for EVs, “batteries that can conform to different shapes, and power decoupled from energy storage, make this type of battery a versatile possibility for even aircraft use.  Recharging can be done by pumping new liquids into the two storage tanks, removing the Influit vehicle from the grid.  It also enables recharging the grid or home energy storage from the vehicle, a useful potential use for load balancing or grid or in-home emergencies. 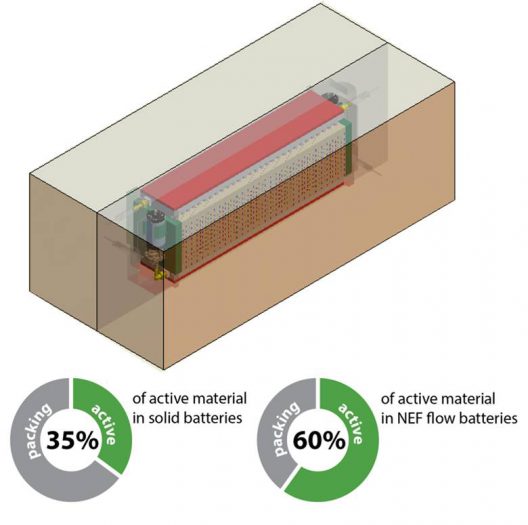 The NEF battery uses positively- and negatively-charged fluids, which are pumped through a flowcell inside the larger cell.  The fluids are water-based, but infused with suspended “nanoparticles of battery-active materials” making an electrolyte that can be charged and discharged multiple times.

NASA electrical engineer Kurt Papathakis, active on the X-57 Maxwell distributed thrust aircraft, presented the Aquifer project at the American Institute of Aeronautics and Astronautics Aviation 2018 conference in Atlanta in June.  He discussed a technology roadmap that foresees NEF reaching more than twice the pack-level energy density of the lithium-ion.  Prototype NEF flowcells produce only “a few milliamps (mA) per square centimeter.  With funding, NASA hopes to deliver first-generation NEF technology with a current density of 100 mA/cm2 by 2020.  This could produce a system-level specific energy of 125 Watt-hours per kilogram or 350 Watt-hour per liter – outperforming lithium-ion. 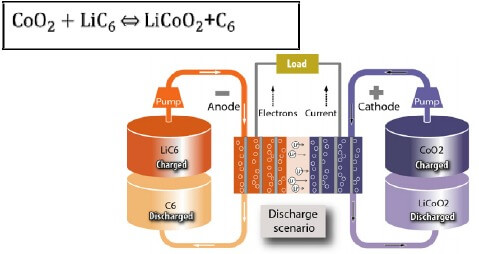 Schematic diagram showing a flow battery with LCO/C nanoelectrofuels as one of potential chemistries to meet an EV metric of 100 kWh energy storage at 400V power.  From Influit founder’s 2014 presentation at  TechConnect World NSTI Innovation Conference and Expo

Papathakis envisions, though industry cost-sharing, 200 mA/cm2, or 530 Wh/kg, compared with 325 Wh/kg projected for lithium-ion in the same time frame.  This could go as high as 750 Wh/kg by 2023, which would seem to lead projected li-ion capacities.  Fluids can be pumped through the flowcell multiple times until the active materials are discharged.  (There is no explanation of whether these fluids are less energy dense following each cycle.)  Wind and solar energy can recharge the spent fuel, eliminating greenhouse gas emissions from the life cycle.

Papathakis says, “We have demonstrated multiple recharge cycles and seen minimum to zero degradation.  Also, unlike Li-ion batteries, NEF does not pay a penalty in cycle life for charging above 80-percent capacity or discharging below 20 percent.

Interestingly, Influit includes a quotation from Mike Bowlin, Chairman and CEO of ARCO (now BP).  “We’ve embarked on the beginning of the last days of the Age Of Oil.  Embrace the future and recognize the growing demand for a wide range of fuels or ignore reality and slowly—but surely—be left behind.”  Maybe he’s on to something.