N Is For Noise, D is for Deliveries*

A July, 2017 article in New Scientist reported that a small test group found “the noise of drones more annoying than that of ground vehicles.”  This has implications for enterprises such as Amazon and Google that hope to perform home deliveries of various goods, including food.  Almost as a refrain, the Wall Street Journal reported in December, 2018 that, “Wing – the  drone delivery company that spun out from Google — was annoying residents in the Australian town where it tests its services.”  Folks in Bonython, the down-under township where the company had set up shop, “Likened the sounds of the original delivery drones to a “chain saw gone ballistic.”  This caused some to spend less time outdoors, and dogs evidenced signs of “a considerable amount of anxiety.”

The Business Insider added that a Wing spokesperson “confirmed… that it has begun testing a quieter drone that ‘blends in’ with nearby sounds.”  The unidentified spokesperson explained, “We’ve developed and are testing a new propeller that results in a quieter, lower-pitched sound that blends in with other sounds that commonly occur in residential neighborhoods.”  Wing will also alter flight routes and lower airspeeds, meaning customers might not get that pizza in 30 minutes.

One of the first applications of this promising technology was created by an Australian Mexican fast food dispenser, Guzman y Gomez, taking burritos and nachos directly to the Outback’s consumers.

This was presaged five years ago in the San Francisco bay area as part of a Yelp experiment gone aerial, the Burrito Bomber.  The delivery required the recipient to chase a parachute.  Was there a deposit return on burrito containers, though?

Wing takes a broader and grander view of their drone deliveries.   “Wing was first unveiled in 2014, under the name Project Wing, as part of the Google X skunkworks. In 2015, X moved under the auspices of Alphabet, Google’s newly-formed parent company, taking Project Wing with it. In mid-2018, Alphabet dropped the “project,” spinning Wing out into its own fully-fledged company.”

Starting with more humanitarian objectives, in 2012, the team tried first to see if self-flying vehicles could safely and quickly deliver everything from medicine to food, even trying to fly defibrillators to people having heart attacks.  Wing took on more mundane tasks:  “The team soon learned that integration into emergency medical services was it own huge task — developing safe and reliable drone technology was a challenge unto itself. So, they honed their focus on redesigning the system to transport small packages, across many everyday situations, where the speed of delivery was a significant factor.” 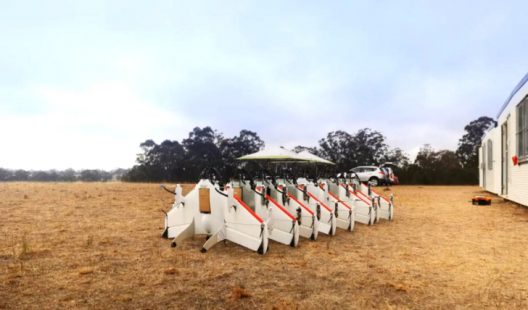 An early flock of Wing drones under test in Australia

“Real-world deliveries began in 2014 in rural Queensland, Australia during which the team successfully delivered a first-aid kit, candy bars, dog treats, and water to farmers. In September 2016, the team delivered burritos to students at Virginia Tech as part of the largest and longest drone delivery test in the U.S.  The team considered food as a “great test case for drone delivery technology” because speed and temperature maintenance are essential.

Designated as a competitor for Amazon, Wing will expand its U.S. and Australian tests and launch its first European delivery services in Finland in spring 2019. Seeing it as a successor to earlier advancements in delivery services such as the Pony Express or FedEx and DHL, Wing’s developers see their system as being as beneficial.  “Whether it’s the parent stuck at home with two sick kids and no dinner, the farmer out in the field with a broken tractor and no tools, or emergency service workers that need medical supplies at the scene of a crisis, current methods of road transportation are not always fast enough to solve the problem at hand.”

Wing could even provide an answer for the soaring amount of greenhouse gases clogging the atmosphere.  “The transportation of goods has also added to the increase of CO2 gases emitted into the atmosphere — in the U.S. alone, 27% of greenhouse gas emissions come from transportation.”  If something as common as pizza delivery can be done on a zero-emissions basis, this might be as important as hybrid cars or Teslas and Leafs in bringing lower CO2 levels.  Now, if drone deliveries can be a silent as they are emissions-free, the world will be a cleaner, quieter place.  Larger, faster drones on the horizon will probably allow tools and medical equipment to be delivered with all dispatch.

*With apologies to Sue Grafton, whose “alphabet” series of crime novels ended prematurely with her passing.  “Y is for Yesterday” was published a few months before she died on December 29, 2017.