Technion is an interdisciplinary technology institution based in Haifa, Israel.  Two years ago, it began promoting its unique approach to splitting water to extract hydrogen.

One of the researchers on the project won a three-minute thesis contest with her quick and eloquent explanation of photoelectric chemical water splitting, key to the research team’s approach.

The Jerusalem Post reported, “Technion-Israel Institute of Technology researchers have developed a new method for the production of hydrogen from water that uses solar energy in a centralized way at the point of sale, such as a gasoline station for electric cars fueled by the gas.” (Editor’s italics)

The article explained, “This eliminates the need for ‘solar farms’ whose hydrogen has to be trucked a long distance, making the process cost effective, safe and efficient.” 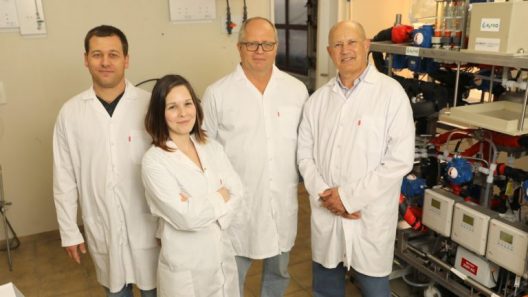 Published two years ago in Nature Materials, the study was led by Avigail Landman, a doctoral student in the Nancy & Stephen Grand Technion Energy Program and Dr. Hen Dotan from the electrochemical materials and devices lab.

Landman is working on her doctorate under the guidance of Professor Avner Rothschild from the faculty of materials science and engineering, and Prof. Gideon Grader, dean of the faculty of chemical engineering.

A new paper in Nature Energy last week reiterates the researchers’ assertions and provides additional data.   The abstract notes the low voltages required and the efficiency achieved in the process.

“Electrolytic hydrogen production faces technological challenges to improve its efficiency, economic value and potential for global integration. In conventional water electrolysis, the water oxidation and reduction reactions are coupled in both time and space, as they occur simultaneously at an anode and a cathode in the same cell. This introduces challenges, such as product separation, and sets strict constraints on material selection and process conditions. Here, we decouple these reactions by dividing the process into two steps: an electrochemical step that reduces water at the cathode and oxidizes the anode, followed by a spontaneous chemical step that is driven faster at higher temperature, which reduces the anode back to its initial state by oxidizing water. This enables overall water splitting at average cell voltages of 1.44–1.60 V with nominal current densities of 10–200 mA cm−2 in a membrane-free, two-electrode cell. This allows us to produce hydrogen at low voltages in a simple, cyclic process with high efficiency, robustness, safety and scale-up potential.”

Schematic of alkaline water electrolysis and the E-TAC water-splitting process. a, In alkaline water electrolysis, which typically takes place at elevated temperatures (50–80 °C), the OER (Oxygen Evolution Reaction) and HER (Hydrogen Evolution Reaction) are coupled in both time and space, as they occur simultaneously at an anode and a cathode, which are placed together in the same cell. A diaphragm or anion exchange membrane separates the anode and cathode compartments and prevents O2/H2 crossover. b, E-TAC water splitting proceeds in two consecutive steps. An electrochemical step (left) reduces water by the conventional HER at the cathode, liberating hydroxide ions (OH–) that oxidize a nickel hydroxide (Ni(OH)2) anode into nickel oxyhydroxide (NiOOH). This step is followed by a chemical step (right), wherein the NiOOH anode reacts with water to spontaneously produce oxygen.
The first (electrochemical) reaction occurs at ambient temperature (~25 °C), whereas the second (chemical) reaction proceeds at elevated temperatures (~95 °C) for the optimum rate of reaction. The first and second reactions sum up to the overall water-splitting reaction, 2H2O → 2H2 + O2. Dotan et al.

Landman explained, “According to our cost estimate, our method could successfully compete with existing water splitting methods and serve as a cheap and safe platform for the production of hydrogen.”

Technion’s alchemy separates hydrogen and oxygen; with the oxygen collected from millions of photoelectricalchemical (PEC) cells.  Hydrogen is collected from another set of cells.  Perhaps the weak link in this chain, the hydrogen in a safely transportable form is then moved to the point of sale.  Will the transport vehicles be powered by clean energy, or will pipelines deliver through existing networks?  Using carbon-based fuels to move clean H2 around would be a detriment to the program, it would seem.

Geographic separation between the solar farm and the point of sale makes use of a pair of auxiliary nickel hydroxide electrodes and a metal wire connecting them.  Somehow (way above your editor’s volunteer pay grade), this releases the hydrogen for the customer’s fuel tank.

But that’s not all. As stated, the vision of the Technion researchers is geographic separation between the sites where the oxygen and hydrogen are produced: at one site, there will be a solar farm that collects the sun’s energy and produces oxygen, while hydrogen is produced in a centralized manner at distributed sites, miles away. According to the researchers, instead of transporting compressed hydrogen from the production site to the sales point, it will only be necessary  the auxiliary electrodes at the two sites.  Economic calculations performed in collaboration with research fellows from Evonik Creavis GmbH and the Institute of Solar Research at the German Aerospace Center (DLR), indicate the potential for significant savings in the setup and operating costs of hydrogen production.

Many thanks to Howard Handelman for alerting your editor to this news.

Next post: Scylax E10: Electric Flight Over the North Sea