There are now two Ampaire electric EELs* flying, courtesy of Ampaire Aviation.  The second test vehicle recently set a world record, staying in the air for two hours and 32 minutes, covering 341 miles at an average speed of “around 135 mph.”
A six-seat Cessna 337 “Skymaster,” the “push-pull” twin has been modified by Ampaire “with an electric motor in the nose and traditional [internal] combustion engine in the rear.  The paired powerplants act as a parallel hybrid, both electric and ICE units providing thrust simultaneously.

Ampaire flew an electric-and-gas-powered Cessna 337 this year. With assistance from Ikhana, a modification and conversion specialist,  Ampaire replaced the 337’s rear engine (which drives a pusher prop) with an electric propulsion system, leaving the forward engine in place.

It is now swapping the configuration around – putting the engine in the back and moving the electric system forward, with batteries removed from the cabin and installed in a pod under the aircraft.

Ampaire’s partner on the 337, Hawaii-based Mokulele Airlines, will fly the aircraft in this new configuration in the first quarter of next year, according to Brice Nzeukou, Ampaire Product Manager.

A Quite Normal Cross-Country Flight

Ampaire reported, “The craft took off from Camarillo Airport just north of Los Angeles at 12:20 PM. Test pilot Justin Gillen and Flight Test Engineer Russell Newman, flew up California’s Central Valley at 8,500 feet, landing at Hayward Executive Airport at 02:52 PM.” Gillen explained, “The mission was a quite normal cross-country flight that we could imagine electrified aircraft making every day just a few years from now.”

The record flight followed four weeks, 23 flights, and 30 hours (“with 100-percent dispatch reliability) since the Hawai‘i Bird first took to the air.  Ampaire’s general manager Doug Shane said, “Our success in taking this aircraft in a short period from the test environment to the normal, everyday operating environment is a testament to our development and test organization, and to the systems maturity we have achieved with our second aircraft.” 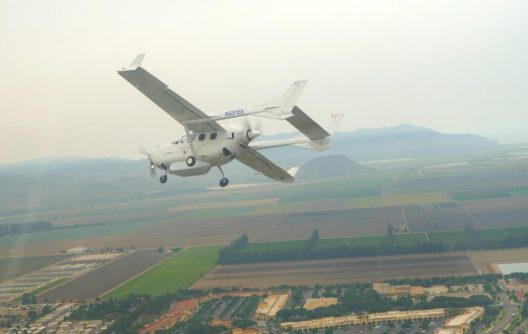 The Hawaiʻi Bird, so named because it will take part later this year in a series of demonstration flights with Hawaiʻi-based Mokulele Airlines on its short-haul routes, will be partially disassembled in Hayward for shipment to Hawaiʻi. The Hawaiʻi flight trials are funded in part by Elemental Excelerator, a cleantech incubator headquartered in Honolulu.

Ampaire’s  electric EEL will serve as “a testbed aircraft for the development of high-powered electronics, inverters, motors, and related systems.”  A platform for developing scalable technology and certification processes, the EEL can also serve owner-flown, charter and short-haul regional airline/cargo carriers.  The EEL will have operational costs cut with fuel savings of 50 to 70 percent and maintenance costs only 25 to 50 percent of the conventionally-powered original.  The hybrid electric system will provide safe transport between islands, able to hop 200 miles with reserves while carrying three passengers or 450 pounds of cargo.

*According to Wikipedia, “EEL refers to the original 337 designation, with the characters reversed.”

Ampaire’s CEO Kevin Noertker said, “The Electric EEL is our first step in pioneering new electric aircraft designs. Our next step will likely be a 19-seat hybrid electric retrofit program that will lower emissions and operating costs, benefiting regional carriers, their passengers and their communities.”

Ampaire and aircraft services company Ikhana have been designing a 19-seat (or 4,000 pounds of cargo) hybrid-electric aircraft based on the popular de Havilland Twin Otter aircraft, to be called the Eco Otter SX, since October 2019 as part of a NASA-funded project. 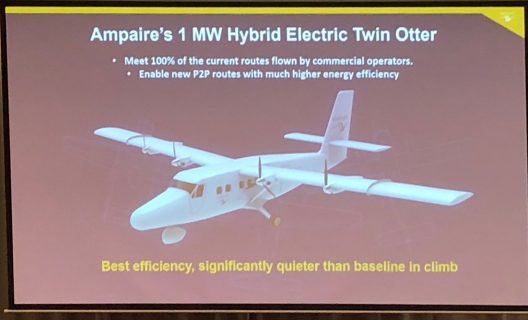 “Twin” Otter as shown at DLR symposium, but with four motors

Like the EEL, the Otter will save 20 to 30 percent on fuel and 10 to 25 percent on maintenance. The Twin Otters may become four motor craft with hybrid propulsion using a Diesel engine to generate electricity and a full electric system, according to Brice Nzeukou.

The companies expect to complete their study by the end of the year and have the modified 337 certificated by the end of 2021.  Even grander plans are on the horizon.