Amidst stage smoke and Hollywood-style dazzling lights, Archer Aviation “flew” its Maker into public view two weeks ago.  On an immersive cinema platform in a hangar in Hawthorne, California, Maker emerged amid all the pounding two drummers could produce.  It seemed to hover above the varied scenery over which it appeared and the on-stage and on-screen special effects were special indeed.

The cynosure of the hoopla, however, was strangely static, even though its guiding lights were highly animated.  Co-founders and Co-CEOs Brett Adcock and Adam Goldstein performed flawlessly in promoting their creation, adding to the professionalism of the event.  Since the event was inside, and the crowd was allowed to come on stage under the rotor blades, it was probably prudent to have the motors raised and inactive.

Less static in this Computer Fluid Dynamics (CFD) rendering, the Maker displays the flow around its 12 rotors in vertical flight.  Since battery tests are underway, perhaps soon we will see Maker taking flight.  Then we can make genuine comparisons with Joby’s machine and Beta’s Alia.

The craft carries 74 kilowatt-hours of Meru battery energy, about equal to an early Tesla S.  Its 12 motors can generate a maximum of 672 kilowatts (900.8 horsepower), or about 56 kW (75 hp.) each.  The amount of battery energy would be used up in about six minutes, though, at full power.  This would indicate a flight path that would rise quickly and transition to forward motion and aerodynamics for the quick mission.  We will need better batteries – and soon. 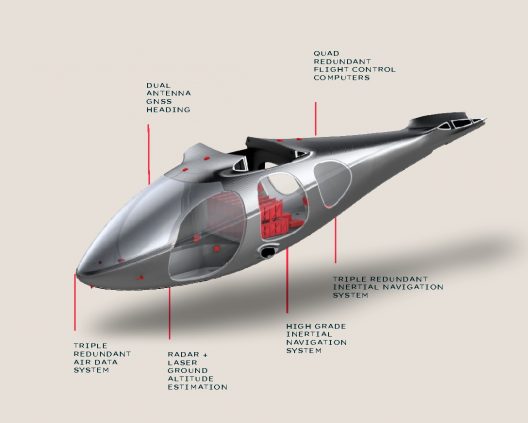 Competition and Litigation are Heating Up

Is it just me, or are a great many of the growing crop of eVTOLs looking somewhat similar, like the front-runners in a beauty pageant?  It’s often hard to see subtle differences between designs, some of which may be hidden in software or firmware.  Those similarities, though, have led to a lawsuit from Wisk against Archer.  eVTOL News reports, “On April 6 of this year, Wisk Aero filed a lawsuit against Archer, alleging theft of intellectual property and trade secrets, stating that three outgoing Wisk employees downloaded significant amounts of data from its servers prior to resigning and leaving the company for Archer; Wisk noted, in particular, the similarity of its as-yet unbuilt design filed in a January 2020 patent application and the Archer design ”

Such patent battles are an old story in aviation.  The Wright Brothers and Glenn Curtiss fought for years over who invented the means of rolling and aircraft about its longitudinal axis.  The Wrights warped their wings to roll, while Curtiss used the ailerons we see on most aircraft today.  Regardless of the legal outcomes, the competing factions eventually consolidated into the Curtiss-Wright Aircraft Company.

In the meantime, the growing number of firms lofting eVTOLs grows, but competition will winnow the crop and we will probably end up with a limited number of builders with the financial and engineering resources to press on.