A three-pilot crew accompanied by a five-person, multi-vehicle support crew have set a world endurance record for electric flight.  The team traversed 1,350 kilometers (839 miles) over not-always-hospitable terrain and through not-always-welcoming weather.  Participants in the record attempt held up admirably, with few problems other than seemingly constant cross-wind landings and often uncooperative weather.

Their flight made it onto Australia’s largest television network.

Eyre to There Managing Director Barrie Rogers explains the limitation of the aircraft and the effect this had on the flight.  “The Pipistrel Alpha Electro – dubbed the ‘Tesla of flying’ – currently has a flight time range of about 1 hour and cruising speed of 85 knots (157km/h) so we’ve had to very carefully plan each stop and build in contingencies for weather such as strong head winds.”

The craft itself shows the characteristics that make it a good trainer – but probably not one’s choice for a world endurance record.  The 10.5-meter (34.5 feet) span Alpha carries a maximum of 550 kilograms (1,212.54 pounds), putting it in Light Sport Aircraft territory.  Remember,  t00, that the weight doesn’t go away as the motor drains electrons, so landings and takeoffs are equally heavy.

As noted, it makes a great in-pattern (“in-circuit”) training aircraft, but range limitations keep the Alpha Electro from striking out for distant realms.  To help overcome that, the South Australia flight acts as a reconnaissance project.  Barrie notes, “The flight will also investigate suitable airfields along the route for the introduction of electric aircraft charging infrastructure into the future. Eyre to There Aviation plans to prepare a report for the State Government outlining the regional potential for upgraded charging infrastructure in support of current and emerging electric aircraft capabilities. This includes a combination of plane and electric vehicle charging where applicable.”

Even though Alpha Electro’s cruise duration of one hour with a 30-minute reserve limits it practical range to 75 nautical mile (139 kilometers or 86 statute miles), people like Joseph Oldham in Fresno, California are fielding four Alpha Electros to make short cross-country flight among a group of participating airports – all of which are being equipped with charging stations. 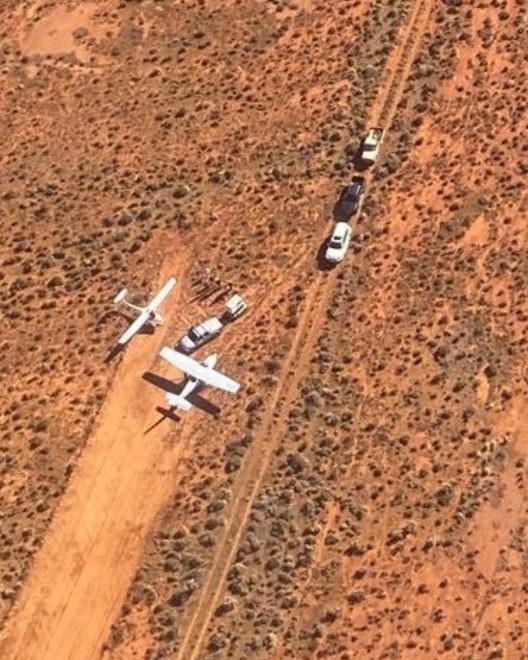 Alpha Electro with support vehicles. It took careful planning and precise navigating to find that strip!

Dan Johnson provides another perspective.  ” While a strong and notable effort, the attempt and the support it requires puts battery-electric propulsion in perspective. Several current, gasoline-powered Light-Sport Aircraft could fly the entire 1,150 kilometer distance on a single tank (or tanks) of fuel without any need to stop and with no support crew.

“Let’s be fair: Electric airplanes are relatively new and they will only get better. It is not reasonable to expect them to perform equally with fossil-fuel-powered aircraft that have been developed over many decades and with billions of dollars invested to help them achieve the high state-of-the-art they possess today.

“Yet what this observes once again is that batteries are the weak link in the electric propulsion chain. Energy contained in batteries is a small fraction of that contained in a similar volume or weight of gasoline. That gap is narrowing but the pace seems glacial compared to forecasts of electric enthusiasts. Battery improvements of a few percentage points per year means decades before batteries match fossil fuel in energy per pound.” 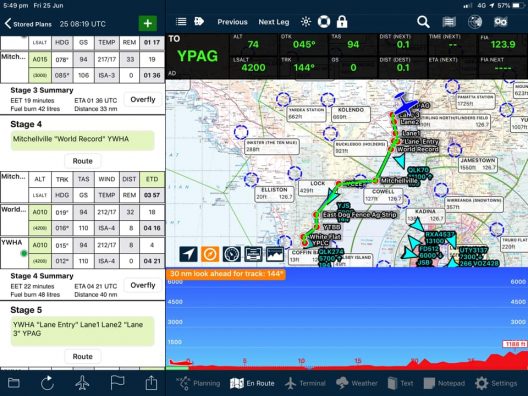 Michael Coates, Master Distributor for Pipistrel USA, is an Australian by birth.  For comparison with this week’s record, he flew from Brisbane, Australia to New Zealand in a Pipistrel Sinus, roughly equivalent to the Alpha, but heavier and faster.

Landing at Lord Howe and Norfolk Islands along the way, he delivered the plane to Kerikeri Airport after flying a total of 1,523 statute miles in three hops during the 2006 overwater journey.  Gas was available at all airports.

The three Alpha Electro pilots brought an enormous blend of skills and experience to the project.

Barrie Rogers, Managing Director of Eyre to There Aviation, said, “It’s been a mammoth effort by everyone involved to achieve this incredible feat.”  On his Linked In page, Barrie explains, “My company specializes in disruptive Aviation Technology in the fields of Electric Aircraft and the emerging E-VTOL capability.”  There are hints that he may take part in manufacturing Pipistrels in South Australia. 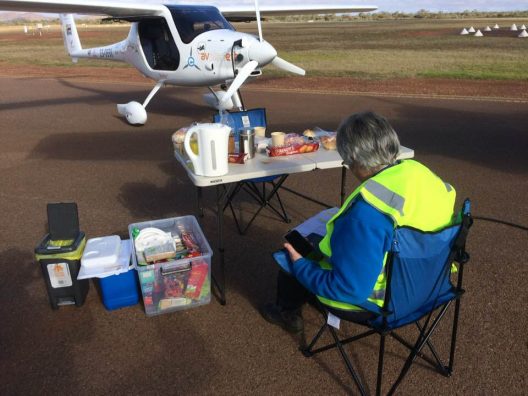 “Cath busy crunching numbers for the next few legs. Heading into station country from here: so much more challenging than that faced by the German team last year. AvPlan making the many changes, permutations and “what ifs” easy to compute and compare. Good spread for breakfast too!”  Photo from David Bradshaw’s Facebook page

Catherine Conway OAM: The Medal of the Order of Australia is awarded for achievement and service of merit by the Australian Prime Minister.  Catherine has served her country in many capacities for over 30 years and is now Operations Manager at Airborne Research Australia.  The non-profit organization, “probing the environment using the least intrusive and cost-efficient state-of-the-art airborne technologies .”  She is also an accomplished sailplane pilot.

Since electric aircraft “records” are a recent phenomenon, there seems to be some confusion as to what constitutes a record.  As shown in Michael Coates’ flight, the range allowed by gasoline is still “miles ahead” of that offered by batteries.  Electric aircraft records still fall short of those for fossil-fuel propelled craft.  But “conventional” aviation has been here for 118 years, and recreational craft often seem stuck in the 1930’s.  With promised battery development, or a radical shift to hydrogen power, electric aircraft could be ready for their own golden age.