Bye Aerospace, Oxis Energy and the Safran Group have introduced an, “Eight-seat all-electric twin turbo-prop class airplane, the eFlyer 800™.”  It’s a fascinating combination of new airframe, new batteries, and new motors.  An American airplane powered by English batteries and propelled by French motors will be an international accomplishment, to say the least.

The craft, roughly equivalent to a Beechcraft King Air 260 in every respect except range, will be a fully-electric luxury machine capable of carrying one or two pilots and up to seven passengers.  Cruising at up to 320 knots (368 mph) at 35,000 feet would make quick business of its 500 nautical mile (575 statute mile) range.  It will have to slow down to 280 knots to meet that 500 miles and still have 45-minutes of instrument flying regulation (IFR) reserve, though.  eFlyer’s 3,400 feet per minute rate of climb will take it to cruising altitude quickly.

Packing a full-airplane recovery parachute adds a safety backup that should rarely be needed, thanks to dual redundant motor windings and quad-redundant battery packs.  Further safety elements include an emergency auto-land system, software with an “intelligent algorithm ensuring envelope protection, terrain avoidance and routing for [that] emergency auto-land.” Optional solar cells could supplement the aircraft’s range and in-wheel electric taxiing could enable main battery use for flight operations only.

Operators will appreciate the low operating cost of the eFlyer 800, about one-fifth that of “traditional twin turboprops.  The craft, intended for the air-taxi, air-cargo, regional and charter aircraft markets, “…Is the first all-electric propulsion technology airplane that achieves twin-turboprop performance and safety with no CO2and extremely low operating costs,” according to George E. Bye, Bye Aerospace CEO.  He adds, “This type of remarkable economy and performance is made possible by the electric propulsion system and advanced battery cell technology that results in significantly higher energy densities.”

Charles Alcock reports in Future Flight that Oxis Energy, associated with Bye Aerospace for the last five years, “expects to start delivering its solid-state lithium-sulfur (Li-S) batteries to customers for trial applications in the fall of 2021. The UK company says the technology will offer significantly improved performance for electric aircraft developers, compared with existing lithium-ion batteries.”

Lithium-sulfur cells have a higher energy density than lithium-ion cells.  The Perlan Project used lithium-sulfur batteries on Perlan 1 and early on in the Perlan 2 because of that factor and the reassurance that they are less likely to experience thermal runaway and subsequent fires.  Oxis Energy makes that point by shooting bullets and pounding nails through their pouch cells with no loss of current and no release of the magic smoke inside.

Oxis seems headed toward a solid-state lithium-sulfur battery.  They will introduce Quasi Solid-State Li-S cells (with an electrolyte combining liquid and solid components with a specific energy of 450 Watt-hours per kilogram and an energy density of 550 Watt-hours per Liter this fall.  They hope to increase those numbers to 550 Wh/kg and 700 Wh/L by the fall of 2023, and then to 600 Wh/kg and 900 Wh/L by 2026. 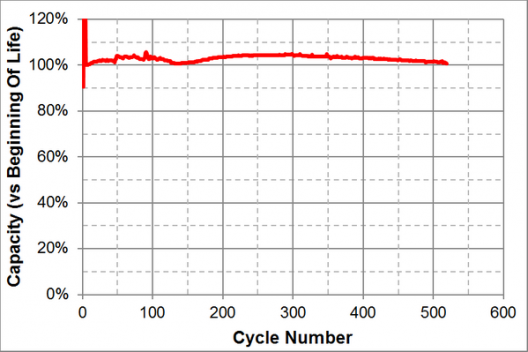 Oxis Energy CEO Huw Hampson Jones reports, “Based on our existing U.S. client base, we know that aircraft manufacturers welcome the move from conventional to solid-state Li-S [batteries.”   The company is also offering the new Li-S batteries for various marine, defense, and ground vehicle applications. It has been developing the technology over the past four years and three years ago filed nine sets of patent applications.  That’s a small part of the company’s innovative drive.  With over 43 patent families, OXIS has been granted 204 patents for its Lithium Sulfur cell technology. There are 101 patents pending.

Bye Aerospace and Safran are powering the eFlyer 2 and eFlyer 4 with ENGINeUS™ motors, which integrate the motor and its inverter into one tidy package.  They are working together to determine, “The most efficient electric powertrain for the eFlyer 800 (dual ENGINeUS electric motors and GENeUSGRID™ electric distribution and network protection system).”  Hervé Blanc, Executive Vice President and General Manager Power with Safran Electrical & Power, explains. “Safran product lines with the ENGINeUS™ motors, rated from 50kW to 500kW/1MW and GENeUSGRID™ systems, perfectly fit with the Bye Aerospace portfolio of e-aircraft.  Building upon our successful cooperation on eFlyer2 and eFlyer4, we are very proud to bring our best expertise to support Bye Aerospace in the design of the new eFlyer 800.” 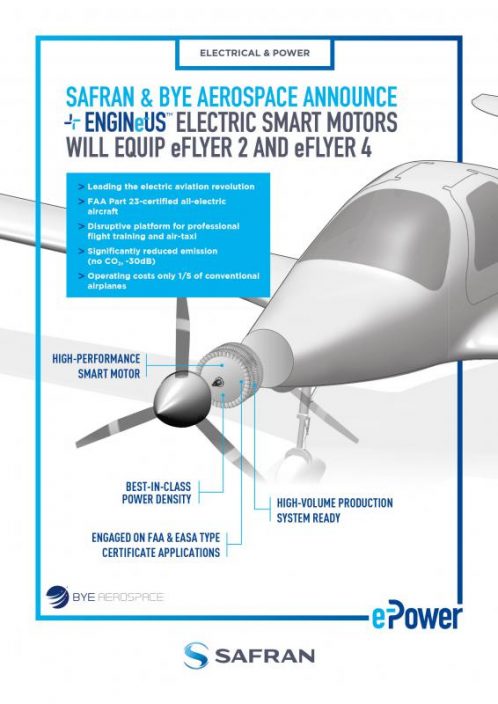 Combining the motor and inverter gives a package that is 94-percent efficient overall.

Bye said eFlyer 800 customer deposit agreements are complete, and several being developed with U.S. and European air-taxi, air-cargo and air charter services, “Details about those agreements will be announced soon, and as they are finalized.”

Bye Aerospace has led in getting FAA Part-23 certification for the eFlyer 2 and its professional flight training mission and the four-seat eFlyer 4 for air taxi, cargo and advanced training uses.

Flight schools, charter operators and other users will benefit from five-fold lower operating costs compared to those for internal combustion aircraft, no CO2 emissions, and decreased noise. “Bye Aerospace estimates the eFlyer will eventually eliminate the release of millions of metric tons of CO2 each year as its deliveries begin and the general aviation fleet is replaced.”

Thanks to Diane Simard,  Executive Vice President for Bye Aerospace, and Mélodie Susini of the Safran Group for material in this blog entry.