e-Genius Gets Around Quickly, Inspires Others

Prof. Dipl.-Ing. Rudolf Voit-Nitschmann (emeritus) had a lot to do with designing the 1996 Icare II solar-powered sailplane and the 2011 e-Genius.  Icare II set several world records in its 20 years, most under the guidance of pilot Klaus Ohlmann.  e-Genius won the award for being the quietest airplane at the Green Flight Challenge held in Santa Rosa, California, and was a close second to Pipistrel’s G4 in passenger miles per gallon (equivalent) energy use.

Dipl.-Ing. Voit-Nitschmann was kind enough to explain to your editor how the propeller center came to be at the top of the tail on e-Genius.  It’s a similar configuration to that on the Icare II*, and one he had found to provide the greatest undisturbed air to the propeller and the least added friction drag, since only the lower part of the blade crossed in front of the upper part of the vertical fin and rudder.  This configuration was on display in abundance when both Icare II and e-Genius showed up at this year’s SmartFlyer Challenge in Grenchen, Switzerland. 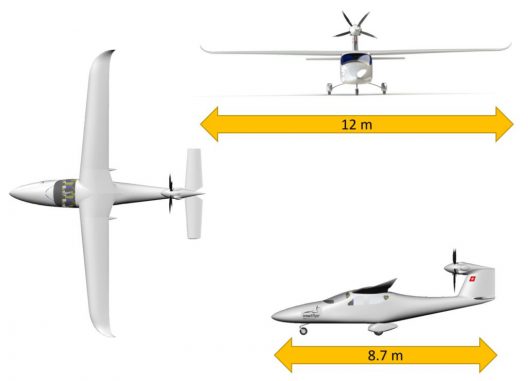 The SmartFlyer Cruiser’s development is based at Grenchen, and its four-seat design draws on Voit-Nitschmann’s basic approach to drag reduction.  Another craft, Urs Villiger’s Traveler, a hybrid similar to the SmartFlyer, is still under development, but shows the same tail-propeller setup in a video from its Facebook page.

Icare II and e-Genius had a central role in displays at the SmartFlyer Challenge and highlighted how at least the basic configuration could be adapted to different missions.  Spectators had to be impressed that a 20-year-old, solar-powered craft could charge its batteries on a cloudy day, and still demonstrate impressive performance. 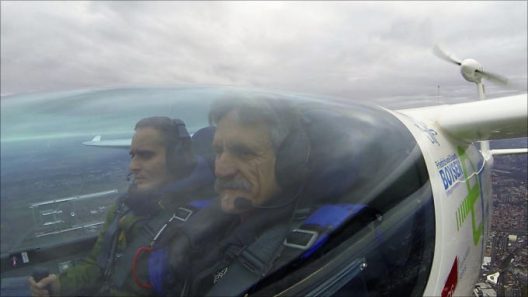 The aircraft was flown by record flyers Klaus Ohlmann and Ingmar Geiss from the Institute of Aircraft Design. The two new world records were set according to the regulations of the international air sports federation FAI. Photo: ifb University Stuttgart

Stuttgart University reports, “The aircraft was flown by record pilot Klaus Ohlmann and Ingmar Geiß of the Institute of Aircraft Design. Both of the new world records were set in accordance with the regulations of the World Air Sports Federation FAI. In the category „electric aircraft“ the e-Genius already holds five other FAI world records over different distances and reached altitudes.

Yet Another Four-Seater Inspired by e-Genius

“The „e-Genius project is part of several research projects at the Institute of Aircraft Design with the aim of investigating how to reduce CO2 and noise emissions with battery-powered and hybrid-electric aircraft, in order to contribute to the reduction of aviation’s environmental impact and thus improving its social acceptance.”

Ingmar leads the team working on the realization of a four-seater derivation of e-Genius, Eco4.  Winner of last year’s Berblinger Prize, the airplane will travel on 40 percent less energy than a comparable conventional aircraft because of the cleanness of its design.  As Stuttgart University’s description explains, “This is achieved by combining an optimized fuselage with an efficient hybrid-electric propulsion chain. A small but powerful battery system enables a silent take-off without the combustion engine running and resulting in less noise emissions. With four persons on-board the airplane has a range of 1200 nautical miles (1,380 statute miles). A special focus was put on the practicability of the ECO4 by meeting common requirements regarding take-off distance, climb rate and approach speed. The described principle could also be applied to commuter airplanes making them more efficient and less noisy.”

Eco-4, a derivation of e-Genius’ configuration

e-Genius and Icare II are by highly socially acceptable as they pass quietly, and in e-Genius’ case, quickly overhead.  They have also led the way into making future craft, cleaner, quieter, and more efficient.

*Icare II had its propeller behind the T-tail to allow folding for gliding flight.

Next post: Fisker’s Plans for Cars and Patents for Solid-State Batteries