The EleFanT in the Room

Electric Ducted Fans (EDF) may soon show some promise in full-size flight.  Several projects are under way, including EleFanT, an interesting development in Germany by GKN and KTH (the Swedish Royal Institute of Technology).  First, though, we’ll look at two stateside projects.

EDFs fans are nothing new in the model aviation world, often powering large-scale models of actual jet fighters or trainers.  Such model motors, combining their thrust, can augment lift and propulsion on light aircraft, and a few larger projects are attempting to utilize that promise.

David Ullman, in Independence, Oregon has flown a Jabiru he rebuilt from a wreck with its Jabiru engine providing the main power, but augmented in thrust and lift by four small electric ducted fans (EDFs).  The arrangement is a partial demonstration of IDEAL, which stands for “Integrated Distributed Electric – Augmented Lift” flight, using “thrust from distributed electric propulsion to improve the lift and drag performance of the aircraft during takeoff, cruise and landing.” 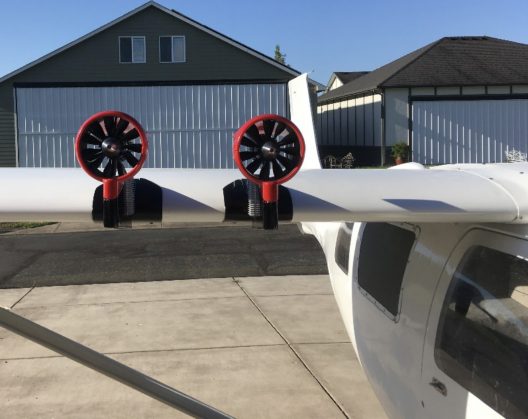 The small motors are 120 millimeters (4.72 inches) in diameter, off-the-shelf units.  Arrayed across the inner leading edge of the JabirWatt’s wing, they were “not enough to sustain flight, but sufficient to collect data to compare with wind-tunnel and theoretical results,” according to David.  Results from actual flights have led to some exciting developments which must await the lifting of a moratorium for your editor to share.  David assures us that, “Electric airplanes are coming; they just won’t look like what people expect.”

Jetoptera, in Edmonds, Washington, has been test flying scaled-down versions of what they plan for full-size demonstrations soon.  Their Fluidic Propulsion™ may remind many of the Dyson bladeless fans one sees in appliance stores.  Nilesh Gandhi of Mumbai, India has demonstrated a small drone using Dyson-type technology.

But who better to explain the virtues of fluidic propulsion than the head of Jetoptera, Andrei T. Evulet in a TED Talk at the University of Strathclyde in Scotland?

The demonstrations are impressive and show a clear advancement toward the desired technology.  A few quibbles remain.  He explains the quarter-scale demonstration model did not use the actual fluidic technology for fear of damaging components.  Electric power is used on the small model, but batteries are not capable of demonstrating that same capability of larger craft.  That seems a bit obtuse considering that Joby and other eVTOL makers are demonstrating electric vertical lift with ostensibly far less efficient propellers and rotors.  Evulet does not mention fuel cells as a possible power source.

We look forward, though, to larger demonstrations and the development of batteries up to the challenge.

Electric-Flight.eu reports that, “In England, a sheath current blower driven by an electric motor is being developed for future electric aircraft.”  GKN Aerospace, developing this system in collaboration with KTH (the Royal Swedish Institute of Technology) will derive thrust from a ducted fan instead of conventional propellers. According to GKN, this solution offers three main advantages: safety, noise level and [ease of] motor installation.  This is somewhat clumsily called the EleFanT project. 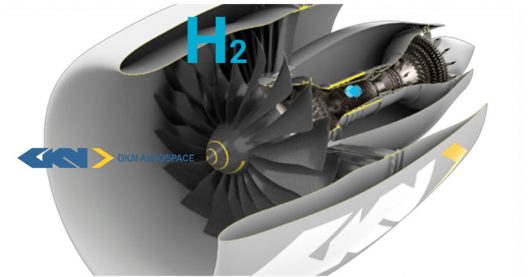 GKN’s ducted fan system combines features of a conventional jet engine and the same Coanda effect used in Jetoptera’s design.  As suggested here, hydrogen may play a role in powering this engine

The collaborators hope to accelerate the pace of development in electric aviation and “position participants for international engine and aircraft development projects.  Kicked off this year, the 1.5-year project is supported by the Swedish Energy Agency.  Participants will focus on aerodynamic design, performance, lowering noise and creating new manufacturing technologies for an electrically powered turbofan that will power smaller regional aircraft.

The sheathed fan can be “powered by electricity, either from batteries, hydrogen fuel cells or even more conventional hybrid propulsion solutions.”  Part of GKN Aerospace’s sustainability goals, the project “will be delivered from its brand-new Global Technology Centre in Trollhättan, Sweden.

Henrik Runnemalm, Vice President GKN Aerospace Global Technology Center in Trollhättan, Sweden, explains, “We are very positive about this initiative, which helps us to become part of the solution to aviation’s climate challenge.  We will benefit greatly from GKN Aerospace and KTH’s long experience in turbomachines, lightweight construction and advanced manufacturing technology. From an electrification and sustainability perspective the project is strongly aligned with our recently announced H2GEAR and H2JET programs.”

Next post: Zeva Zero – the Return of the Puffin?