Eric Raymond is a real pioneer in electric aviation.  Decades before Solar Impulse made its epic flights Eric navigated his solar-powered Sunseeker I across the United States in 21 hops, traveling from Desert Center, California to Kitty Hawk, North Carolina. 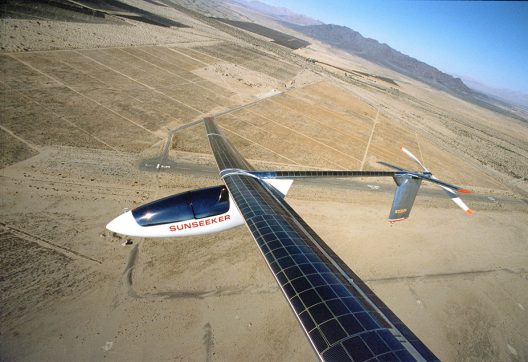 Sunseeker 1 departing Desert Center, California from which cross U. S. trip began in 1990

He flew over the Matterhorn on his way from Germany to Italy in Sunseeker II.  He and his wife Irena build the world’s first two-seat solar-powered airplane, the Duo, which they regularly fly over Italy and Switzerland.  He shared the promise and mystique of such flight with the readers of Travel Forward recently. 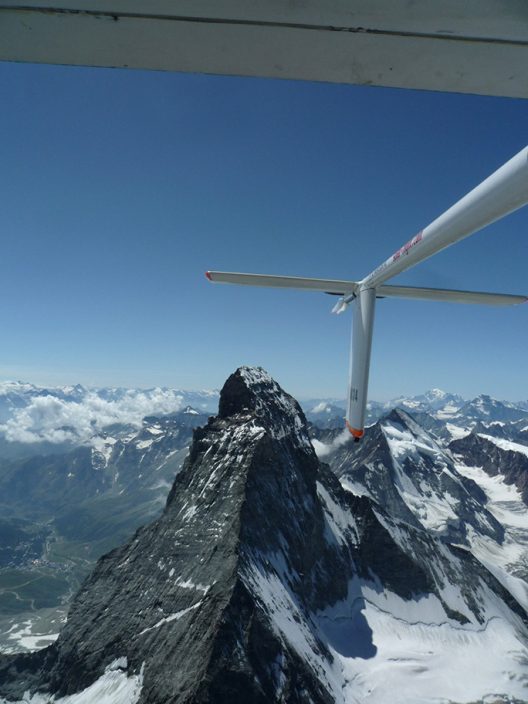 Sunseeker 2 looking back at Matterhorn after successful crossing

The Future is Electric: Exploring the World in a Two Seat Solar Powered Airplane

While Tesla and other car manufacturers are changing the way we commute, prototype electric airplanes are set to change the way we fly in the future.

Aviation has become the last frontier to become more environmentally friendly, even though technology devolved for electric vehicles can be adapted for aircraft. Since 1975, many airplanes have been powered with electric motors, with ever-increasing capabilities.  Since batteries can give power only for a limited time, the first airplanes to take advantage of electric motors have been gliders. 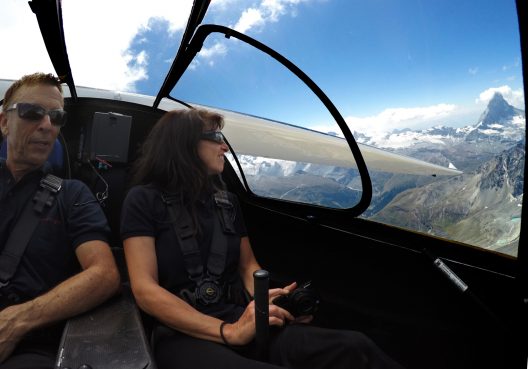 Eric and Irena Raymond in Sunseeker Duo, having just flown over Matterhorn on trip from Italy to Switzerland, 2015

After taking off and climbing with the power from the on board batteries, they can turn off the motor and fly peacefully over land for hours. A lot of us may have a preconceived image of what a solar panel looks like, never dreaming they could be part of an airplanes structure. However, they fit neatly onto gliders, enabling the recharging of batteries whilst in the air! This saves not only petrol and fuel emissions entering the atmosphere but also allows the motor to run with full batteries several times per flight.

The experience of soaring like a bird, comfortable and silent, through the air with no noise from a motor to spoil it, is a dream! Note that you are never in doubt with the added security of an electric motor to climb when needed. The technology capabilities in aviation are close to limitless, and crafts like the SUNSEEKER DUO, show promise for short and medium range commuter aircraft in the near future. Adding hybrid propulsion to an electric aircraft can greatly improve the range, while retaining most of the benefits of a pure electric aircraft.

A Typical Day Flying in an Electric Airplane

The cockpit is so quiet that no headsets are used.  Conversation between the two people on board and for radio communication is at a normal sound level.  The electric motor cannot be heard from the cockpit at all, just the swish of the propeller, far behind on the tail.  Unlike most small planes, the motor is in back to give the best flying experience for the pilots in the cockpit.  The view forward is excellent since the motor and propeller are not in the front.  The bubble canopy allows for a breath taking views and has a dark tint to keep the passengers cool, sitting in the sun.  Large air vents bring in fresh air, and for an outdoor feel, the large side windows can slide open, allowing pilots to touch the air as they fly! 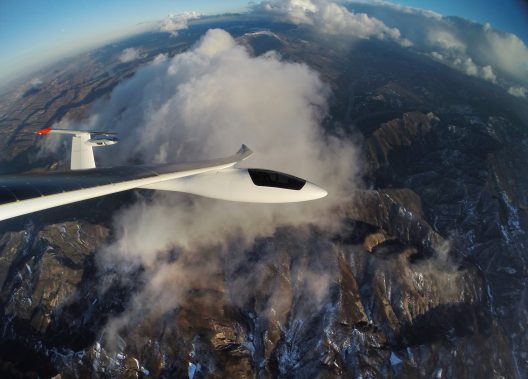 Built for touring, this light solar-electric airplane can fly all day long in good weather, over the clouds, often at 3000 – 5000 meters altitude.  The solar power gets stronger and stronger at high altitudes, its height limit is still unknown.

Solar Flight Inc. have plans that could inspire electric aircraft manufacturers all over the world, from Canada to South America: travelling and offering rides to locals to view their land from above in an airplane that does not disturb anyone or anything! Success of this demonstration flights should lead to inspiration for every game player in the industry to invest in electric and solar solutions.

By Eric Raymond, Founder and President of Solar Flight Inc.

Next post: Pipistrel Velis: Part of an Electric Heritage