A new “record” for an electric aircraft flight probably won’t make the books, but was a great sales opportunity for the off-grid charging system that accompanied it.

21 electric airplane records exist in the list of Federation Aeronautique Internationale-recognized achievements.  At least one was set in 2012 by Jean-Luc Soullier in his Colomban MC-30 Luciole (Firefly) – 189.87 kilometers per hour (117.98 mph) over a 15 kilometer closed course using a Lynch-type brushed motor.  It topped his record in February of the same year of 136.4 kph (84.76 mph). 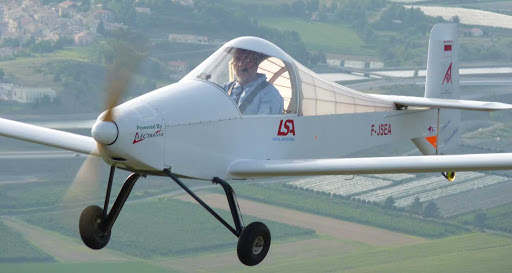 Jean-Luc Soullier in his record-setting Luciole nine years ago

For a while, Soullier held records for altitude and distance, but these were eclipsed by others.  At the time, your editor encouraged beating these records, since they were early efforts in a field that should have shown greater progress that it has.  Batteries are not that much improved in some respects.

Recent flights in Australia, Europe, and America required a mobile infrastructure to charge those batteries.  Cars, trucks and airplanes carried the charging gear for each flight, but this week’s flight over California’s Central Valley showed another possibility.

Beam Global set the scene with its press release.  “We’re setting out to prove that zero emission aviation is not only possible, it’s here.  Join us as we power the longest flight ever in a production electric aircraft powered entirely by off-grid renewable energy.  The multi-leg quest starts and ends in Fresno and culminates with a media event at Fresno Chandler Executive Airport Saturday July 17.” 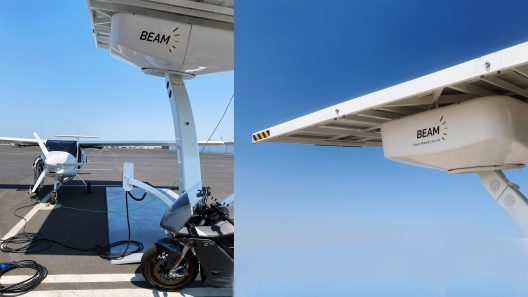 It’s difficult to quantify the “longest flight ever” for electric aircraft.  Eric Raymond did 21 hops across the United States in 1990, kept aloft by solar power.  Solar Impulse made it around the world and across the Atlantic and Pacific on sun power.

Joseph Oldham, founder and CEO of New Vision Aviation flew the Pipistrel Alpha Electro, part of a fleet of four owned by the organization.  Beam Global CEO Desmond Wheatley was on hand at each stop along the way, explaining the benefits of his off-grid, stand-alone charging stations.

Taking a straight shot up Highway 99 and starting on Wednesday, July 14, the Pipistrel Alpha Electro’s flight left Fresno’s Chandler Executive Airport and headed to Madera Municipal Airport.  With two hours for recharging the aircraft, Oldham and Wheatley gave interviews to the local press.  Oldham flew on to Madera, Merced, and ended the morning’s ride at Modesto, where the team repeated their interviews with the press, showing off the Pipistrel and Beam’s ARC solar-powered charging station.  The early mornings avoided the turbulence likely in the hotter part of the day.

Starting at 6:30 Thursday morning, Oldham landed at Lodi Airport for another two-hour charging and interview session.  Finishing the day with a 25-mile hop to Sacramento’s Executive Airport, he and Wheatley gave their final interviews of the day.

Friday and Saturday saw a reversal of the trip, with a special event for “media and guests” in the early afternoon.

Fox 26 reported the return for their viewers.  “Beam Global pilot Joseph Oldham has broken the world record for longest flight ever powered only by off-grid renewable energy.

“The flight was organized by Beam Global to promote the movement towards clean transportation. 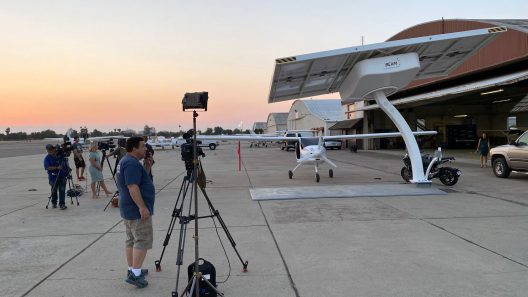 Flying early mornings helped avoid turbulence.  “(The flight) was smooth,” [Oldham] said after landing. ‘It was nice and cool, and the air was nice and smooth. (It was) just really wonderful.’
Oldham said he is able to fly the aircraft, which weighs about 1,200 pounds and has a wingspan of 36 feet, for about an hour at a time.”

“Beam Global hopes that setting this record proves that zero-emission transportation is possible.”
{ 0 comments… add one }