Metro Hop™ is an electric, conventional fixed wing, all-weather aircraft designed to operate within the urban air mobility environment, according to their web site.

Metro Hop is a unique view from the leaders of the CAFE Foundation, which is often allied with the Vertical Flight Society.  Metro Hop’s fixed-wing approach seems to fly in the face of the team’s normal affiliations.

The Sustainable Aviation Foundation was established as a proponent of fixed-wing design by President Brien Seeley, and promotes “pocket airparks,” small urban and suburban airports that would distribute availability of short-range aircraft within walking or cycling distance for many urban dwellers.  CAFE would distribute spaces similar to heliports on rooftops or on specialized buildings such as those envisioned by Uber as part of its LIFT program.

Metro Hop, according to the development group, would cruise at 400 kilometers per hour (250 mph) and carry two passengers.  Using current battery technology, it would have a 160 kilometer (100 mile) range, enough for in-city hops in the largest urban areas.  It near-silent operations would be imperceptible against the normal city background noise, allowing day and night operation.

Its spring-loaded  landing gear will keep passengers from bouncing around on takeoff and landing, even though it provides a bounce on departure.  Powered wheels will enable climbs and descents from and to the service area below the landing platform, although passengers might find the squeamish part of the flight is the descent from the landing platform.

According to Metro Hop, “Urban air mobility means a safe, efficient, community-accepted method of moving people and cargo via aircraft within cities.”  The firm will attempt to operate out of its own unique Skyport stations on or near “prime urban locations,” providing the mobility that ground transport often fails to deliver.

Metro Hop uses not only existing battery technology, but follows a “well-known flight envelope, and a clear path to certification,” according to company leaders.  Their hope is that it would make a trillion-dollar industry possible, operate on $39 fares and make itself “a commonplace tool for any business, large or small.

Bruno Mombrinie and an Inventive Streak

One of the founders of Metro Hop, Bruno Mombrinie has a history of mechanical design, having a degree in mechanical engineering from MIT.  He helped build the Chrysalis human powered airplane, even getting to fly the featherweight biplane several times.  He recalls the feelings that experience drew from him.  “The feeling of being so, so high (39ft)…to fly under my own power was beyond…I just wanted to burst…actually I was so out of breath from the effort, I could hardly mouth ‘yippee!'” 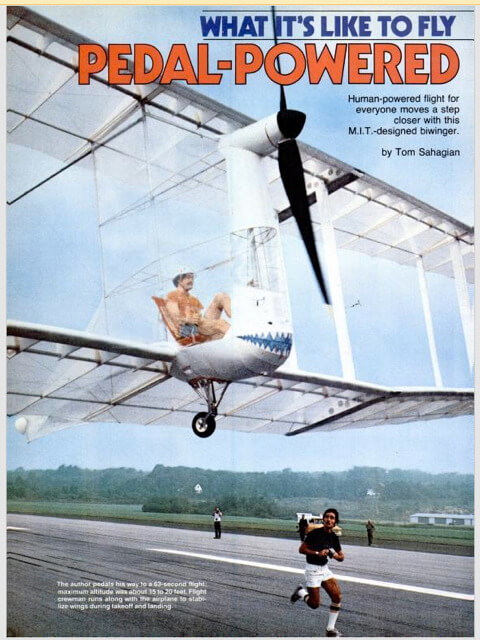 He went on to found AVEC Scientific Design, specializing in disposables for operating rooms, and has a medical device for children with spinal cord injuring awaiting FDA approval.  He even designed the world’s lightest and stiffest bicycle crankset, which helped Lisa Vetterlein set a woman’s human powered vehicle land speed record of 66.65 mph.

Whether we will see hundreds of Metro Hops wending their way over the skies of San Francisco will depend, as all great ideas do these days, on finding venture capitalists willing to back the enterprise.