We can tell things are heating up in the electric aircraft marketplace.  Established aircraft companies are investing (Boeing and Airbus for starters), growing numbers are planning for electrified and autonomous future flight (Uber Elevate Summit), and an absolute plethora of new designs are tumbling forth from an aeronautical cornucopia.  Their video of an Uber sky taxi ride illustrates the charm of the idea.

Perhaps taking the 2011 Green Flight Challenge as his reference point, Mark Moore explained how Uber inspires others to give their best efforts to create several plausible vehicles.  The American Institute of Aeronautics and Astronautics (AIAA) reports, “’We will never build a vehicle, but we want to make sure that our partners who are building vehicles are successful and that these aircraft are as community-friendly as possible,’ Moore said, explaining Uber Elevate’s partnership with manufacturers and regulatory agencies to clear the way for Uber to provide on-demand flight through a mobile app. Some of the companies partnering with Uber have not publicly released their aircraft concepts, so Moore unveiled a ‘common reference model’ that illustrates some of the challenges these electric aircraft will face, including battery energy density and noise pollution.”

Uber’s reference model seems to have inspired five similar efforts including one from Karem (otherwise known for development of the Predator UAV and heavy-lift machines).  The company’s web site describes their effort in only general terms. “Electric Vertical Takeoff and Landing (eVTOL) Aircraft: Karem is applying its decades of innovative aircraft design and proprietary VTOL technology to the eVTOL market in partnership with Uber. In the future, it will offer riders a 10x improved transport experience by flying above traffic, point-to-point, at speeds up to 200 mph – all at the cost of an UberX ride today.” 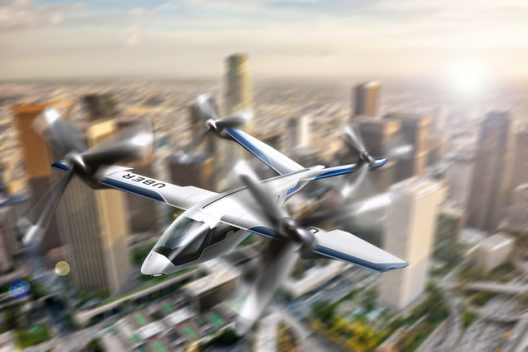 This may be due, in part, from “Karem’s patented Optimum Speed Tiltrotor (OSTR) technology [which] combines the fast, inexpensive, safe operation of efficient fixed-wing airplanes with the robust hover capability of helicopters.

Recently purchased by Boeing, Aurora Flight Sciences fields its multi-rotor design. Like many others, it features eight vertical lift rotors and a propeller and wing to provide forward motion.  Aurora and Boeing predict test flights in 2020, and some statements in a recent Bloomberg article suggest things may happen quickly.  Dennis Mullenberg, Boeing’s CEO, says, “I think it will happen faster than any of us understand. Real prototype vehicles are being built right now. So the technology is very doable.”  Bloomberg explains that sales will take place in the next decade, although without sharing when in the decade that might be.

Bell Helicopter Has Been Showing off a Cabin

Showing the cabin from their Uber-related sky taxi, Bell has shared their vision with audiences at the Consumer Electronics Show (CES) and South by SouthWest (SXSW).  The Fort Worth Star Telegram reports that Uber and Bell will be flying a full-tilt version of what is described as a “tilt-rotor” machine much like a V-22 Osprey by 1923 over the north Texas skies.  Bell’s long history in vertical flight development bodes well for their project. 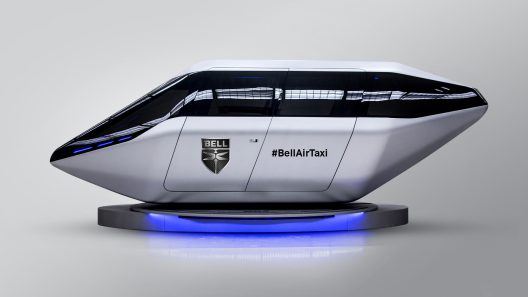 As to be expected with Pipistrel, their offering is highly aerodynamic, with a swept wing and fighter-like cockpit enclosure – and no visuals on how the vertical lift system will work.  Given Ivo Boscarol and Tine Tomazic’s history of innovative and sometimes revolutionary work, we expect some surprises.  According to Clean Technica, Ivo explained, “Pipistrel is not trying to reinvent the helicopter by giving the vehicle many rotors, but is rather embracing dedicated propulsion solutions for cruise and vertical lift with built-in scaling capability.”

Embraer X is based in Melbourne, Florida with innovation teams in Silicon Valley and Boston.  It revealed a four-seat “DreamMaker” at Uber Elevate. Powered by eight electric motor-driven rotors and a tailfan, the cabin will provide a great view for its four passengers.  CEO Paulo Cesar de Souza e Silva predicts, “We are relentless in our quest for constant growth, and through Embraer X we will drive disruptive innovation and accelerate the creation of new businesses with the potential for exponential growth. Urban mobility is ripe for transformation and we are committed to having a major role in this key market.”

Uber plans to invest 20 million euros ($23.4 million) with France’s École Polytechnique over the next five years to develop sky taxis.  According to The Verge, “The company announced Thursday that it will build a new Advanced Technologies Center in Paris focused on its ambitious Uber Elevate project, the ride-hail company’s first research and development hub located outside North America.”

France may be an interesting choice for an academic partnership, considering violent protests by Parisian cabbies when the service attempted to start a few years ago.

Uber is just one of many organizations garnering attention and largesse in financing electric aircraft.  Others not following either Common Reference, or striking out in new directions known only to them at this point, are bringing other waves of creativity and surprise with them.