A New Crew of Magnificent Men in Their Flying Machines

Fred To, former head of the British Human Powered Flying Club, has shared a major announcement.

“The first and only crossing of the Channel in a human powered aircraft (HPA) was 42 years ago by Bryan Allen in the aircraft Gossamer Albatross designed by Paul MacCready; no successful attempts have been made since.
Human-powered flying remains one of the world’s most exclusive sports, with more people having flown into space than have flown a human powered aircraft. This is largely due to the sheer difficulty flying for any length of time in a HPA. The race will combine extreme engineering with extreme athletic ability.

“The race will mark the 60th anniversary of the first flight of human-powered aircraft by Derek Piggott in the Southampton University student’s aircraft SUMPAC, it will also celebrate the original Channel crossing in 1979 by pilot Bryan Allen. It is kindly supported by Anne Williams, one of the creators of SUMPAC. The race is also endorsed by Marshall MacCready, son of Paul MacCready who designed Gossamer Albatross, the first and only HPA to cross the channel.

“‘Crossing the English Channel in a human powered aircraft — it has been done, once before. Barely. It was one of the most amazing athletic achievements of our time. To think that several international teams are going to attempt the same feat, on the same day, in a race to see who is the fastest, seems almost a bit bonkers. It will be a huge technical and logistical challenge, but most of all a supreme test of athletic and piloting skill. It is going to be fascinating to watch, and thrilling to participate in.’

‘One of the aims of the competition is to use the race to inspire the next generation of engineers and scientists.’

“Entrants will have to fly 35 kilometers (21.7 miles) from Folkestone across the Channel to France. All aircraft will take off on the same day to ensure no team has an unfair advantage due to weather though take offs will be staggered to ensure there are no mid air collisions. It is the first human powered aircraft time trial in history with multiple teams in the air simultaneously which will prove incredibly exciting. Prize money will be awarded based on the quickest crossing. Teams will be followed by speed boats with rescue divers standing by in case an aircraft ditches.

“Prospective teams should contact the organizers if they are interested in competing in the world’s first and only time trial HPA race across the Channel. On account of the risk and difficulty teams will have to demonstrate past experience in HPA building to qualify. Teams from all countries are invited to apply.

“‘Flying a human powered aircraft is the most amazing experience: a bit of appropriate nervousness before take off, followed by swift pedaling and the noise of the wheels on the tarmac, and then suddenly it becomes quiet and you are floating, like a magic carpet ride. It’s virtually silent except for your own labored breathing, and the receding excited shouts of your teammates. Magical.’   (Above, we see Alec’s Dash HPA in flight at Moffett Field in 2016, piloted by Craig Robinson.)

“The race will mark the 60th anniversary of the first flight of human powered aircraft by Derek Piggott as well as celebrating the original Channel crossing in 1979. It is kindly supported by Ann Williams (one of the creators of SUMPAC, the world’s first human powered aircraft) and Marshall MacCready (son of Paul MacCready, designer of the Gossamer Albatross, first and only HPA to cross the channel).”

“As aircraft are powered entirely by pedaling, HPA racing is one of the world’s most sustainable airsports with each HPA being a miracle of efficient engineering. As humans have a much lower power to weight ratio than conventional engines the aircraft will have to be incredibly light. It is common for a HPA with a 30 meter wingspan to only weigh 40 kilograms (88.2 pounds), less than the pilot. Every gram saved reduces the amount of cycling power that the pilot needs to produce and will be vital to determining whether the aircraft will make it across the Channel.

“It is the largest prize announced for human powered airplanes since the Kremer Prizes were created in 1959 and organizers are hopeful that the race will inspire the next generation of HPA pilots and engineers along with increasing STEM engagement among students.”

Those excited by this announcement have over a year to prepare themselves and their machines for a great challenge and a festive occasion.  Peleton® should add a new category to their trainers.

Since we have compared the Great Human Powered Aircraft Race to Magnificent Men in their Flying Machines, here is a review of that 1965 film, an expensive production with Derek Piggott as the flight chief and more than occasional pilot for all the craft.  Shot in high-grade 70-millimeter with excellent production values, the film, despite its age, holds up well, and the flying is… magnificent.

To contact the organizers and perhaps attain your own glory, here is the contest’s address: https://thegreatrace2022.com/

Thanks to Bryan Allen himself for alerting your editor.

Fred To sent along this further recognition from the British newspaper, The Daily Telegraph.  As Fred points out, “Now comes the really hard work.” 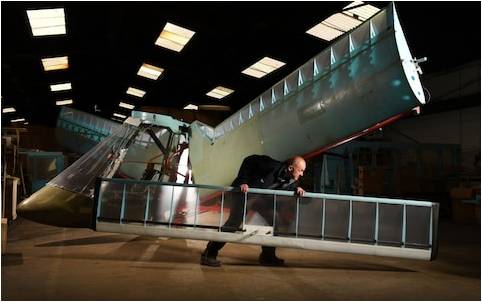 In the video, Mike Truelove pedals his Aerocycle from the grass, requiring extra effort to overcome drag from the irregular surface.  Imagine gaining altitude and pedaling for 22 miles.

Next post: Two Wood Aircraft Leading to the Future