We share this press release from ZeroAvia to allay any rumors or misinterpretations as to what happened May 1 on a test flight of ZeroAvia’s Piper Malibu.  The aircraft was damaged in an off-airport landing, but everyone on board managed to exit the craft safely and carried out safety protocols.  The incident will doubtless be thoroughly investigated by ZeroAvia’s team and by the United Kingdom’s own Civil Aviation Authority.

On April 29th, 2021, ZeroAvia’s R&D aircraft made an off-airport landing just outside Cranfield airport perimeter during a routine pattern test flight (logged as ZeroAvia Test 86, and the 6th flight in this flight testing segment). The aircraft landed normally on its wheels in a flat grass field and almost came to a stop, but was damaged as it caught the left main gear and wing in the uneven terrain at the end of the field at low speed. Everybody involved is safe, and without injury. The incident was immediately reported to the Air Accidents Investigation Branch (AAIB), and the Fire Service attended on the ground, as is the standard procedure.

The facts as they stand now are as follows: the flight conformed to the approved test route over the airport; the structural integrity of ZeroAvia systems was maintained throughout the incident sequence and there were no unintended hydrogen or electrical releases and no fire; after the landing, the crew were able to safeguard the battery and safely release hydrogen from the onboard tanks, following ZeroAvia safety protocol; no fluid leaks were observed at the time; and full data logs were preserved and will be used in our investigation. 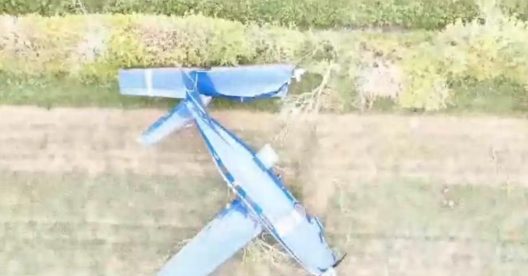 Following the flight test incident, ZeroAvia appointed a team of experts to conduct the internal investigation. These individuals, led by Dominic Cheater, ZeroAvia’s Head of Airworthiness, are independent from the design and operation of the HyFlyer I program. Dominic holds extensive expertise in airworthiness, flight test engineering and air safety. He has past experience with major industry names such as Babcock International as Chief of the Office of Airworthiness.

​Christine Ourmieres-Widener, a senior advisor and member of ZeroAvia’s Board of Directors. Christine formerly served as a CEO of a number of airlines and a member of the International Air Transport Association’s Board of Governors.

​The investigation team will deliver a full review of the incident in collaboration with the UK’s AAIB, in-line with industry best practices and procedures. It will investigate the technical and operational events of the incident, identify its root causes, and ensure we learn from them. The process is already underway and we will share more once it is complete.

We will continue to work with the AAIB to ensure the delivery of a full and detailed investigation of the incident. As with any investigation, it will take some time. It is paramount we follow procedure and refrain from rushing the process. We will provide updates as we are able.

This incident and the ensuing investigation will undoubtedly disrupt our 6-seat HyFlyer demonstration program that was coming to an end in the following weeks. However, we do not expect any negative impact on our commercial-intent HyFlyer 2 program targeting 10-20 seat aircraft, or our large-engine development program targeting 50+ seat aircraft.