Zeva Zero – the Return of the Puffin?

Dreams of flight often include the dreamer wearing a silk scarf, if not a cape.  We would love to emulate our super heroes with all their startling dexterity.  A group in the Puget Sound area is making part of that dream come true.  Starting with radio-controlled models a few years ago Zeva Aero has progressed to a full-scale unit that will carry an individual Superman style, with the pilot/passenger peering through a transparent shield.

Needing only a 30-foot by 30-foot landing area, Zeva’s Zero boasts the ability to hoist a 220-pound person vertically, tilt over and take them 50 miles at up to 150 miles per hour.  Zero’s eight electric motors provide a degree of redundancy and safety, enabling flight with a few motors not at their full potential (an electrical pun there).  The firm says, “ZERO is a new class of aircraft that blends the best features of multi-copter with streamlined wing-body for improved range and efficiency.”  The aerodynamic shape is offset visually by the eight spinning propellers, which might present a hazard even for an enclosed pilot/passenger. 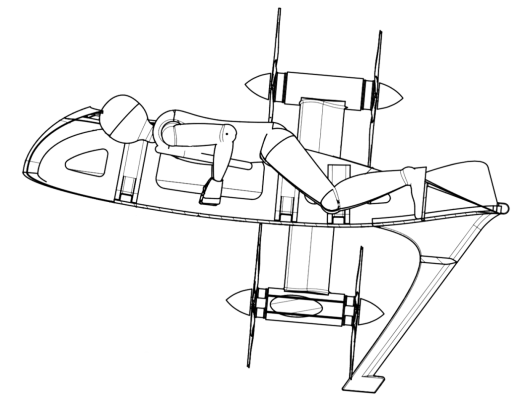 Prone, the pilot/passenger gets a Superman view of the world below.  Propellers twirling close to important body parts may be of concern

SkyDock™ – The First Step’s a Doozy!

Zeva Zero eliminates elevator rides and even waiting on the corner for a cab or Uber to show up.  Instead, their convenient Lyft substitute enables those who can afford a high-rise life style to step from their apartment directly into their Zero.  The SkyDock features “computer-controlled alignment and capture,” sure to ingratiate it to its owner when he or she latches on to a firm landing spot many stories above ground. 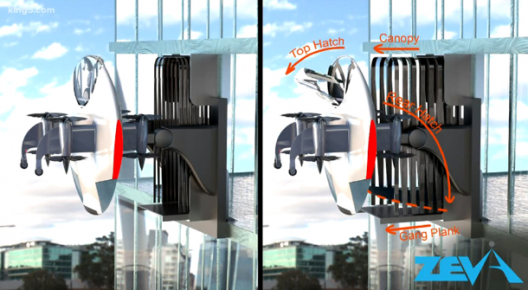 Its integrated system eliminates the need to manually plug in the Zero for between-flight charging.  SkyDock can even act as an emergency exit that might enable emergency crews access to the high rise.

Links to the Puffin

NASA’s Mark Moore, who went on to guide Uber’s urban air mobility program, designed the Puffin as a personal people lifter with the idea of speedily moving individuals.  Aside from the obvious differences (two large rotors vs. eight small propellers), Puffin and Zero share similar upright to prone pilot/passenger accommodation and a planned 150 mph cruise. Ten years ago, Moore had dreams of longer than 50-mile trips, assuming better batteries were on the way.  Alas, energy storage isn’t that much better, but still sufficient for traversing ground traffic and squeezing an hour’s car trip into an exciting 20-minute excursion.

The overall configuration and performance measures are similar, though, and for the adventurous soul willing to accept the limitations of solo flight, a possible convenience in an ever more inconvenient world.

Batteries are Getting Cheaper – but How Much Better?

Although not quite at the $100 per kilowatt-hour point promised for years, batteries a becoming affordable enough to make projects such as Zeva’s possible. 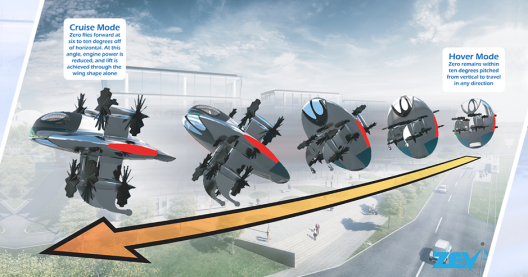 If the energy density were commensurate with pricing, we would see the long-promised 10X battery, and airplane performance would be on a level competitive with fossil-fuel powered vehicles.

In the meantime, our intrepid designers and builders are forging ahead with what’s available.

Zeva participated in the Boeing sponsored GoFly competition and has received support from the Air Force’s Agility Prime program.

Zeva’s timeline shows they think air taxi service will begin by 2025, urban air mobility (UAM) will “be ubiquitous” by 2030, and personal eVTOL ownership will be a thing by 2035.  Zeva projects consumer-owned personal flight vehicles becoming the norm by 2040.  That’s 90 years past the era of Aerocars and personal helicopters we hoped for in post-war America.  We look forward to where the Zeva Zero goes next.

Next post: Hydrogen harvested from Dirty and Clean Sources