A Range Extender You Can Ride Home

Range extenders make any airplane to which they are attached a hybrid aircraft, with an engine-driven generator charging batteries or driving one or more electric motors that provide thrust.  Speaking today at the 7th EASN International Conference on Innovation in European Aeronautics Research, Richard Glassock, a Fellow at the Institute of Aerospace Technology at the University of Nottingham, gave the range extender a completely new mission.

His innovation comes in two versions, the RExLite and RExMoto.  RExLite is a simple generator drive that mounts under the aircraft.  RExMoto looks similar – a streamlined pod under the aircraft – but can be converted to a motorcycle when on the ground.  Both “use conventionally-fueled combustion-engine-driven electrical generators to provide energy at peak efficiency and minimum emissions, effectively converting the All-Electric to a Hybrid Electric aircraft.”

RExLite manages to contain a 40 kilowatt (53.6 hp.) engine-generator in the 60 kilogram (132 pound – depending on fuel load) pod.  According to Richard’s Conference paper, “This will allow the range and endurance for small 2-seat all-electric aircraft to become comparable to conventional combustion engine types in cross-country range with a single person onboard. For local area and circuit flying of 2-seat all-electric types with a passenger onboard, the extra endurance and redundancy will allow comparable flight times without anxiety about battery state of charge and recharging considerations.”  For larger aircraft or even greater range, two pods could be mounted, possibly making the airplane look like a WWII fighter on a long-range escort mission. 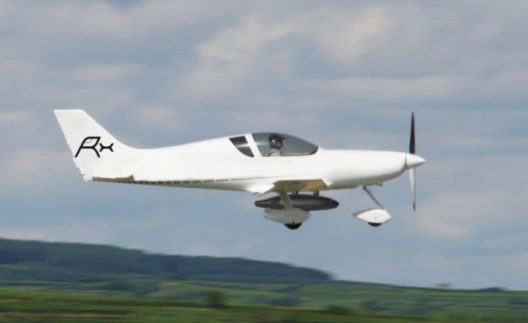 Richard notes that cross-country flights can often end at an inconvenient location with limited options for getting to the nearest restaurant or motel.  The recent eclipse, for instance, lured hundreds of private pilots to the Madras, Oregon Municipal Airport, three miles northwest of the small town’s center.  With limited taxi service and no rental cars on the field, this would be a hot, dusty hike on a summer day.  The utility of aircraft is severely compromised by such circumstances.

(Forgive the annoying soundtrack on the video.  It seems to be on every YouTube version of the event.)

Richard’s innovative solution combines the range extender with a cleverly folded motorcycle.  The 50 kW (67 hp.) engine-generator and 40 kilograms (88 pounds) of fuel are contained in a range extender pod/motorcycle “with an all-up weight not more than approximately 125kg (275 pounds).  The low weight shows enormous attention to detail, with a “novel in-wheel power turbine and rim-drive motor generator” combining functions and reducing overall mass.  Part of this technology comes from the University’s research on electric taxiing for jet airliners. 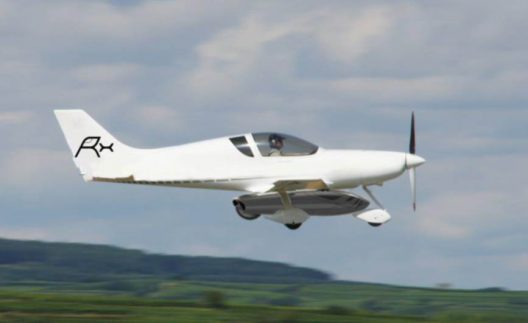 A motorcycle, especially one that can be detached from one’s electric airplane and used for practical operation, could be a great marketing tool for future flyers. 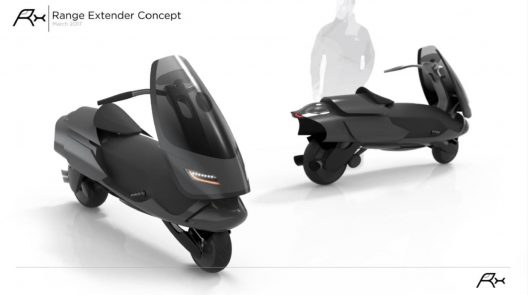 With 50 kW, this 275-pound motorcycle will more than keep up with traffic.

Richard’s presentation includes this insight into his approach to solving some problems that still face those attempting to devise sky taxis and make “door-to-door” travel possible.  “The packaging of the Range Extender as a fully independent and mobile transport system opens the way for electric aircraft transport utility which is currently severely restricted by short range and endurance. Ongoing impediments to utilization of traditional powered conventional light aircraft as a ‘door to door’ transport solution remains a key problem. Recent attention in the domain of ‘aerial taxi’ concepts and long standing attempts at ‘flying car’ solutions indicate that both these approaches remain attractive yet problematic from legacy regulatory and air-worthiness criterion.  The fundamental problems of intermodal access within regulatory constraints can be solved by closely bounding each unit’s function while minimizing redundant features.” 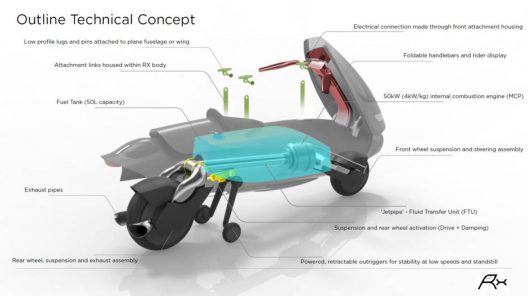 Features of Richard Glassock’s RExMoto. Your editor is not quite sure of the “Jetpipe” Fluid Transfer Unit’s (FTU) function

He reports that, “The concept had an extremely positive reaction from the audience, including some of the most prominent people from the electric aviation industry and academic world.  [The project is] getting some traction now, and all leading to the likelihood of getting a serious project and demonstrator made.”

The University reports on reactions from Richard’s compatriots.

“Professor Herve Morvan, Director of IAT said: ‘We are now living through exciting times in the aerospace industry, probably the most exciting times in two generations, as electrification offers a radical departure in propulsion and aircraft design, and we are delighted to contribute and demonstrate the research being done here. Richard’s project on Range Extenders is one example of the preliminary work we are carrying out in this area.

“’This builds on the University’s commitment to six Beacons of Excellence which were set out earlier this year as well as IAT’s agenda on advanced propulsion. The Propulsion Futures beacon focuses on accelerating the IAT aircraft propulsion agenda and aims to develop more electric technology for medium- to long-haul flights. This is to help tackle performance, environmental and noise challenges, encapsulated in the ACARE Flightpath 2050 targets, in collaboration with leading stakeholders from government and industry.’”  ACARE, the Advisory Council for Aviation Research and Innovation in Europe, has five targets for future aircraft.  Most relevant to Richard’s project, “In 2050 technologies and procedures available allow a 75% reduction in CO2 emissions per passenger kilometer and a 90% reduction in NOx emissions.  The perceived noise emission of flying aircraft is reduced by 65%.  These are relative to the capabilities of typical new aircraft in 2000.”

The University of Nottingham’s IAT is headed by Director Herve Moran and Deputy Director Michael Galea.  Their research extends beyond range extenders into all realms of green aviation. We will look forward to their next innovations.

Previous post: The Lightest Material Encapsulated in the Sheerest