Al Bowers and the Bell-Shaped Curve

Al Bowers has promoted a different kind of lift distribution curve for wings in his talks at the Experimental Soaring Association’s Western workshop, held every Labor Day weekend at Mountain Valley Airport in Tehachapi, California.  Most aerodynamics textbooks model the elliptical lift distribution as an ideal to be achieved in wing design.   R. J. Mitchell, designer of the classic Spitfire fighter, incorporated an elliptical planform, which serendipitously allowed room for the Browning machine guns in the capacious inboard sections.  What could be wrong with that when the finest sailplanes exploit that same theory in their slender spans?

Albion Bowers is retiring Chief Scientist at NASA Armstrong Flight Research Center, Edwards Air Force Base.  His experiments with an alternative way of spreading the lift across a wing have inspired several large models of how a wing with a bell-shaped lift distribution curve might appear – and perform.  Two years ago, he and Erich Chase, a well-known build of high-end boats, brought a full-sized 49.2 foot (15 meter) hang glider wing to the Workshop. It was displayed with an equally low-drag passenger/cargo pod the next spring in San Francisco.

To achieve so much, Al has mentored a large number of NASA interns, 13 of 22 women this last year – a number and a cause he vigorously supports.  Interns have helped build and instrument the ever larger models of his Prandtl-D and Prandtl-M flying wings.  They have flown them on the dry lakes that ring Edwards, with accumulated data showing them to perhaps be the lowest-drag wings in the world.

His interview with Jim “Zoom” Campbell of Aero-News Network gives an abbreviated rendition of Al’s research and the ideas that led to his Prandtl-D and –M wings. 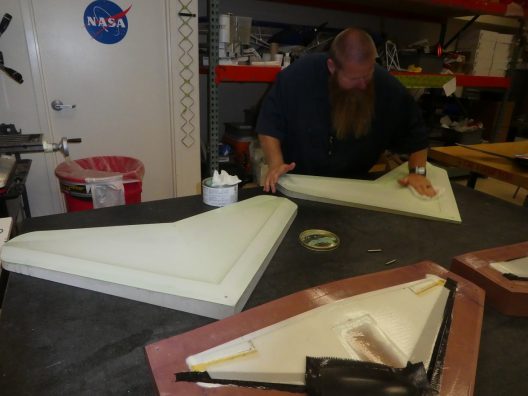 Justin Hall spreads mold release on female mold from which Prandtl-M wings will be pulled. Some of his handiwork may fly on Mars someday

Your editor and friend Mary Maxwell recently visited the model shop at NASA Armstrong where Al Bowers gave us a grand tour.  We watched Justin Hall pull Prandtl-M skins from highly accurate female molds, and were able to hold these small wings which will someday descend through the thin Martian atmosphere.

Prandtl-D number 3 took up a large part of the shop, and Al and Mary were able to demonstrate the extreme downwash at the wing’s tips – part of the way in which the wing achieves low drag and proverse yaw.  It also helps stabilize the wing in flight with excellent results for trim and handling.  Al is most excited that the well-instrumented model was able to return data in its last flights, validating Al’s theories and providing a basis for further development. 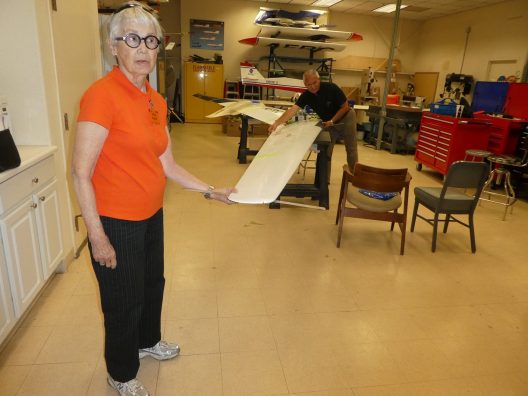 Note distinct difference between angle of airfoil at root and at tip. Angle differences around 12 degrees are necessary to achieve bell-shaped lift distribution.  Note to photographer – tell your subjects when you’re ready to take the picture

Prandtl and the Hortons

Interestingly, Al noted that Ludwig Prandtl and the Horton Brothers included discussions of the bell-shaped curve in their writings, but neither referenced the other’s findings in their own documentation.  For whatever reason, only the elliptical distribution became the standard all these years. 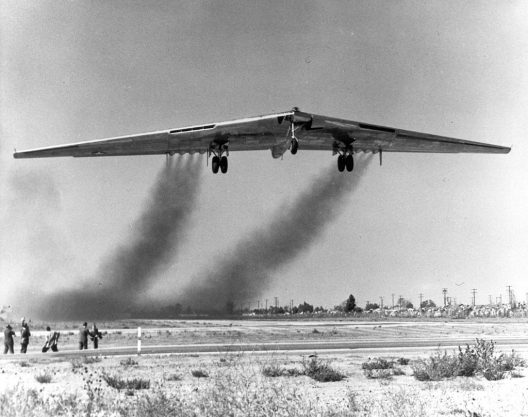 Ironically, Captain Glen Edwards, for whom Edwards Air Force Base is named, was flying the prototype B-49 bomber, a flying wing, when it crashed in the Mojave Desert not far from the base on June 5, 1948.  The cause may have been aerodynamic flutter caused by the airplane exceeding its red-line velocity.  One wonders if today’s triple-redundant computer controls – or even a bell-shaped lift distribution might have helped avert that tragedy.