Battery Options for Range and Longevity

Two varying approaches to battery development may hold clues to future directions for energy storage.  At the same time, their announcements, promising as they seem, reinforce our cautious attitudes toward how battery performance numbers are presented.

According to Green Optimistic, “Researchers from the Pacific Northwest National Laboratory (PNNL) have developed a new formula for battery’s electrolyte solution to enhance its performance unprecedentedly in terms of its service life and storage capacity or an electric vehicle’s range.”

The video gives an overview of what it takes to make a battery and hints at the reasons battery research takes so long to give up improved energy storage devices.

Unprecedented the development may be, and the promise of a battery with a 7X longer lifespan and two-to-three times longer range than currently-available batteries certainly captures our attention.  Its own press release suggests that PNNL researchers are enthusiastic about the longevity of their new chemistry.  “When it comes to the special sauce of batteries, researchers … have discovered it’s all about the salt concentration. By getting the right amount of salt, right where they want it, they’ve demonstrated a small lithium-metal battery can re-charge about seven times more than batteries with conventional electrolytes.

Neither the press release nor the Green Optimistic report, however, provide greater detail about the greater range possible with the new chemistry.  PNNL’s headline gives a clue, “Research hints at double the driving range for electric vehicles.”  Beyond that, they note that “Lithium-metal batteries that replace a graphite electrode with a lithium electrode are the ‘holy grail’ of energy storage systems because lithium has a greater storage capacity and, therefore, a lithium-metal battery has double or triple the storage capacity. That extra power enables electric vehicles to drive more than two times longer between charges.”  That “extra power” in sizes adaptable to EVs may be yet on the horizon, tests having been performed so far on coin-sized test cells.

The “catch” up to now is that the electrolytes used in today’s batteries corrode the electrodes, resulting in shorter overall lives for the cells. 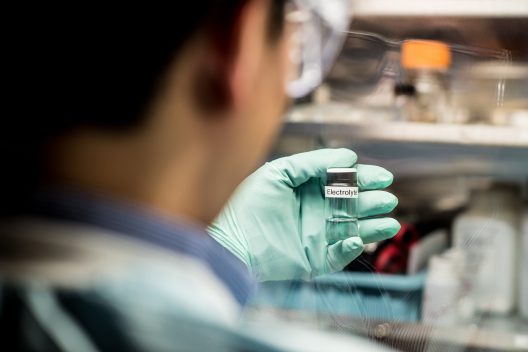 PNNL thinks the key to the battery kingdom lies in electrolytes

PNNL has apparently solved this set of opposing forces with a new “secret sauce” that contains the right amount of lithium salts.  “Their study published in the journal Advanced Materials found out that increasing the concentration of lithium-based salt in the electrolyte solution forms a barrier around the electrodes, protecting them from corrosion and ultimately, lengthening the battery life.”  Two more problems arise from this solution, though.

The team’s findings can be found in the March 25 edition of Advanced Materials.

While PNNL researchers investigate myriad chemistries, Sion Power of Tuscon, Arizona, has gained fame for its Lithium-sulfur cells.  It claims its Licerion rechargeable lithium battery is 60-percent lighter than conventional Li-ion batteries, making it desirable for aircraft and drone use.  Licerion technology, though, can be applied to many different battery chemistries, despite the company’s predilections. 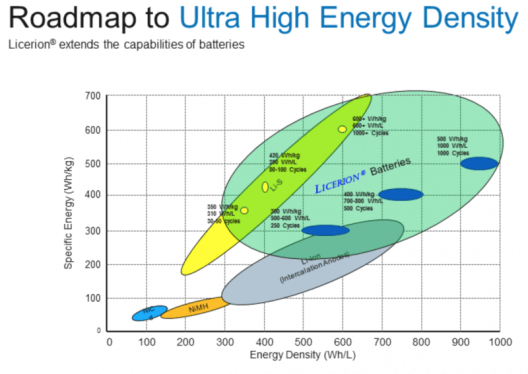 Promoted as having 500 Watt-hours per kilogram, 1,000 Watt-hours per liter, and capable of enduring 450 charge/discharge cycles, this should be the EV battery everyone has been looking for.  Licerion cells are 10 centimeters X 10 centimeters X 1 centimeter (4” X 4” X 0.3”) and store 20 Amp-hours for what the company claims is “the highest energy density combination currently available.”  That set of dimensions and the claimed energy storage may not confirm the 1,000 W-hrs. per liter, though.

A January 18 press release announcing a production ramp-up of the new cells explains, “At the core of Licerion technology is a protected metallic lithium thin film anode with multiple levels of physical and chemical protection to enhance the safety and life of lithium metal anodes. These anodes are paired with traditional lithium-ion intercalation cathodes.”

Sion’s partnership with BASF gives the firm access to new chemistries and their collaboration with Airbus allows testing of these developments in airborne applications.  We can only hope that the numbers quoted are real-world and made available for commercial opportunities soon.

Pushevs.com remains skeptical, though.  “If it is to work out as dreamed and pitched, though, the Sion Power Licerion battery could be one of the first to bring commercial electric flight to the mass market. Maybe. Perhaps. We’ll see.”