Your editor has long held the belief that we are on the threshold of creating a Grand Unified Airplane, a craft that would draw all its energy from solar cells, the flexing of its wings, the air passing over its form, and the very act of flight itself.  It seems to become less of a science fiction ideal and more of real-world possibility every day.  Carbon fiber could be part of that possibility.

What if your airplane were its own battery?  Think of the weight savings and potential endurance and range.  Your editor became fascinated with 2010 research done by Dr. Emile Greenhalgh of Imperial University in London, who developed a structural sandwich with carbon fiber outer layers and a fiberglass core.  It could be used for body panels on a car, inspiring Volvo to become involved and proceed with initial tests.

Since those early tests, other researchers have duplicated and expanded the research, with Dr. Leif Asp of Chalmers University in Gothenburg, Sweden; and Dr. Angela Belcher of MIT adding to our knowledge of these exciting materials.

Dr. Asp, Professor of Material and Computational Mechanics at Chalmers University of Technology and an associate of Dr. Greenhalgh’s, has found that carbon fiber can work as battery electrodes and store energy directly.  He explains possible applications: “A car body would then be not simply a load-bearing element, but also act as a battery.  It will also be possible to use the carbon fiber for other purposes such as harvesting kinetic energy, for sensors or for conductors of both energy and data. If all these functions were part of a car or aircraft body, this could reduce the weight by up to 50 percent.” 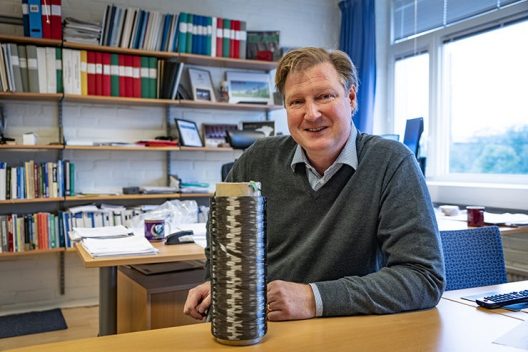 Gothenburg’s approach to incorporating structural batteries as part of a car, similar to Greenalgh’s earlier design

Dr. Asp notes that stiffness is not a big deterrent for the use of less stiff fiber in cars, and even the stiffer fiber that would be favored for aircraft is still probably energetic enough for aircraft use.  “…The types of carbon fiber with good electrochemical properties had a slightly higher stiffness than steel, whereas the types whose electrochemical properties were poor are just over twice as rigid as steel.”  He adds that for aircraft use,  “It may be necessary to increase the thickness of carbon fiber composites, to compensate for the reduced stiffness of structural batteries. This would, in turn, also increase their energy storage capacity.”  Increased weight leading to increased power and range would not be a deal killer in this application, if carbon’s low weight to strength is taken into account.

Dr. Asp thinks the key to design is optimizing vehicles at the system level – based on weight, strength, stiffness and electrochemical properties.  The auto industry, used to optimizing individual components, will have to change its design philosophies to accommodate less efficient structural batteries as energy storage devices, “but since they have a structural load-bearing capability, very large gains can be made at system level.”

Adding a safety factor, he continues, “…The lower energy density of structural batteries would make them safer than standard batteries, especially as they would also not contain any volatile substances.”

The team’s paper, “Graphitic microstructure and performance of carbon fibre Li-ion structural battery electrodes,” can be found in the journal Multifunctional Materials.

Dr. Belcher has been working with combinations of seemingly disparate elements for the last decade, having explored making batteries with viruses, studying how to emulate seashells in growing structures and energy storage components, and even using nanotubes and viruses on search and destroy missions against cancer cells.  Her ability to investigate unlikely combinations led to her winning a MacArthur Fellowship in 2004.  This 2011 TED Talk gives a hint of why she would be awarded a “genius grant.”

Her current work in batteries, cancer research and organic structures are all linked, as the earlier video suggests.

Dr. Belcher’s research in structural batteries shows how much that effort has led to something that might be part of a Grand Unified Airplane.  “Currently 60-90% of the weight of the battery package in an electric car or an Unmanned Aerial Vehicle (UAV) is inactive – does not contribute to energy storage.  This project is developing a structural approach to build vehicle components from materials that do contribute to energy storage, which will enable electrical vehicles with longer battery lifetime.”

See Kieran Strobel, a Research Associate at MIT’s Laboratory for Aviation and the Environment,   present their project at IdeaStream 2018 below.

Medium.com’s Neo.Life link reports, “Belcher also still does energy research, engineering viruses to generate materials that could be used as part of low-carbon energy systems. She teaches, promotes science in grade schools, and tends to two boys whom she describes as her ‘favorite biomaterials.’ But the ovarian cancer research is not just a one-off. She’s working on improving the efficiency of the technology, extending it to other kinds of cancer, and possibly developing a diagnostic tool or screening tool for high-risk women in the future.