Consider encircircling yourself with a ring of tiny electric motors turning a collection of well-coordinated thrusters.  Electric Jet Aircraft of Anderson, Indiana showed off their vehicle, claimed to be the world’s first wearable electric jetpack – the EJ-1, at Oshkosh, Wisconsin during this week’s AirVenture air show.  A 16-motor, battery-powered rig that weighs around 100 pounds, depending on the battery pack, it’s made to fly several feet off the ground while carrying a 200-pound pilot.

The product of 13 years of preliminary design and innovation, the aircraft was test flown before its introduction at the Urban Mobility Showcase at the show.  Composed of four “JetPods,” modules of four electric motors and associated controllers that produce 80 pounds of thrust each, the EJ-1 can logically lift 320 pounds, leaving adequate excess thrust for its 200-pound payload to give a good climb to its fairly low “cruising altitude.”   Flight duration is limited, but a lighter pilot should be able to add larger battery packs and take longer trips. 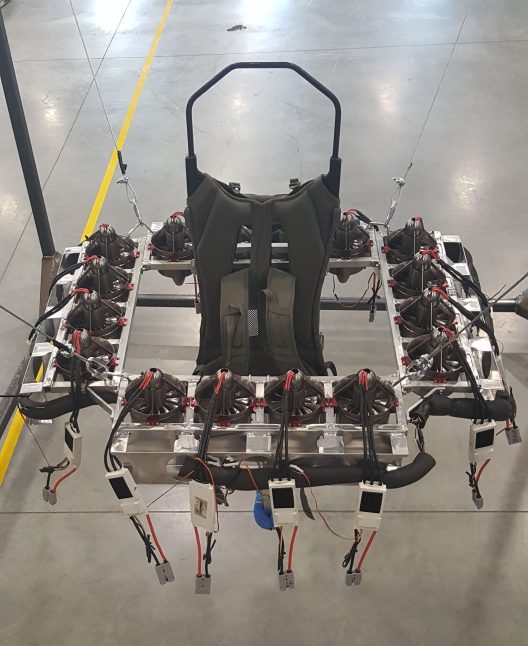 The tight ring around the pilot allows for weight shift control, since the single throttle controls all motors equally.  This makes one wonder how stable this machine will be, and if the attitude controls that seem to go with other machines might not be beneficial.  This aspect of quad-rotor control seems to be a commodity level thing with even the model aircraft community.

Electric Jet Aircraft explains, “Each JetPod is sold separately for $9999.00 each, including batteries, but if you buy 4, you get the jetpack frame for free. JetPods can be used to propel paraglider, hang gliders, kayaks, go karts, or even larger aircraft when clustered.” 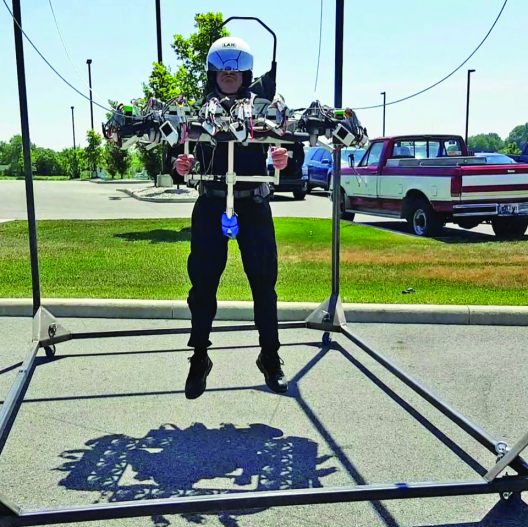 Near future plans include Electric Jet’s entry in the Boeing GoFly competition.  It’s one of the semi-finalists known to be headed for the Leap Day Fly-Off (if your editor understands the rules) along with an indeterminate number of new entries: Boeing is accepting new entries until October 1, 2019 until 6:00 p. m. PDT.

Larger, but still fitting in the Boeing GoFly “compact” definition, the VertiCycle in electric form will compete in the Fly-Off

Electric Jet’s entry will be based on this gasoline-powered prototype shown above but will be all electric in keeping with Fly-Off rules.  Future versions may look like the vehicle below.