Embraer, a Brazilian aircraft maker with ties to Boeing, has been tilling the clean aviation field for several years.  Their current agricultural craft, the EMB 203, has flown on ethanol for some years – a kind of farm-to-aircraft symbiotic relationship.  Going to the next step toward clean, green aviation, Embraer has since devised an electrical powertrain in cooperation with WEG Equipamentos Elétricos and EDP. 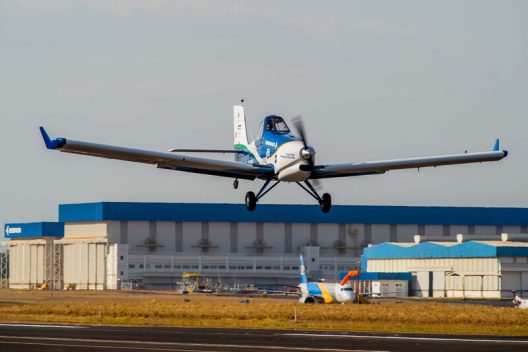 Embraer is deeply involved in programs headed toward making the skies greener.  This includes everything from their aircraft designs to their “DIPAS PROGRAM – DIPAS (Integrated Development of an Environmentally Sustainable Product).”  This program considers “current and future environmental legislation,” alternative technologies and their life cycles.  The program works toward reducing fuel consumption, CO2 emissions, noise, and maintenance costs, while, “Increasing operational efficiency and comfort for the pilot and passengers.”

Other operations to incorporate electrification of flight include Embraer X’s Eve, the company’s approach to urban aerial mobility, and other efforts to offset or mitigate harmful emissions.  “Embraer says it will develop a range of products, services, and disruptive sustainable technologies, such as electrification, hybrid, sustainable aviation fuel (SAF) and other energy alternatives. The company claims it will also offset any residual emissions that cannot be reduced through efficiency projects, available alternative energy or advancing technology.”

The Plane from Ipanema

Flying since 2004 on ethanol, the predecessor to the current EMB 203 was an early attempt to reduce carbon emissions.  Some find this approach controversial, since ethanol production often entails converting food crops such as corn into aviation fuel.  Electricity can be obtained from more sustainable resources, and thus might be more acceptable to environmentalists and those worried about feeding a hungry world.

The base design has been flying since 1970, and Embraer plans to use it as a testbed for electric power.  Its payload of 950 kilograms (2,094 pounds) is great for spraying large fields, and highly useful for carrying a large battery pack.  EDP-funded batteries combined with the “very light electric motor [from] the large Brazilian electrical company WEG” will allow enhanced endurance.  Technology developed on the Ipanema will be transferred to use on the EVE eVTOL (electric Vertical Take Off and Landing) project and probable future electric projects.

Luis Carlos Affonso, Vice President for Technology and Development at Embraer, explains the importance of the Ipanema.  “The first flight of an aircraft is always an important milestone and the start of our first of… ten emission-free electric aircraft is also an important contribution of our teams and partners on the energy transition in the industry. We strive to find solutions that enable a more sustainable future for aviation, and innovation becomes one along the way Play a key role.” 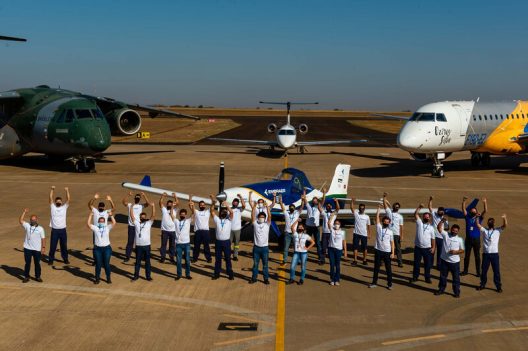 Embraer’s electric agplane with some of its 1,800 builders, flanked by civilian and military craft produced by Embraer

First flight tests include evaluation of performance, control, heat management, and operational safety.  Embraer hopes to validate computer simulations, laboratory tests and integration of the technology, ongoing since the second half of 2019.

President and CEO Francisco Gomes Neto. “We recognize the urgency of the climate crisis and we are fully committed to a more sustainable future.  We are stepping up our efforts to minimize our carbon footprint by remaining dedicated to innovating solutions that have a broader impact for our customers, our local communities and our aircraft.”