It almost stops your editor in his tracks when he reflects that 93 years ago, Charles Lindbergh crossed the Atlantic in his Spirit of St. Louis.  Even more astounding, competitors may win the Freedom Flight Prize by the 100th anniversary of that flight by making a cross-Atlantic and return flight in a 100-passenger, all-electric airliner.

Lindbergh’s plane, custom built but derived from a Ryan M-1 mail plane, cost $10,580 ($158,357 in 2019 dollars) and earned the $25,000 Orteig Prize.  Now, an organization in England, “Carbon Footprint Ltd. has launched a competition to encourage sustainable passenger flight. It has created the Freedom Flight Prize, a competition focused on crossing the Atlantic Ocean 100-percent powered by renewable energy — with seating for 100. The first to do so will win the prize, which is expected to be worth millions of British pounds by the time there’s a winner,” according to Cleantechnica.com. 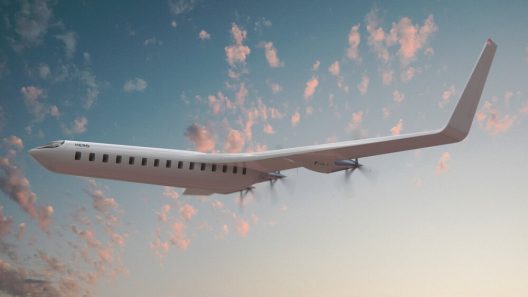 Will the FreedomFlight winner look like Will Doucet’s HERO ZeroEmissions Plane?

“The competition is open to manufacturers, research/academic groups and inventors to design and fly a 100+ seater passenger aircraft powered by 100-percent renewable energy. The plane must complete a return trip from London to New York; each leg of the trip in under 10 hours and must finish the return leg within 24 hours of starting out on the round trip.”

Not even Boeing’s dormant Zunum spinoff or the Electric Aircraft Group’s HERA plan on seating that many.  Jeff Engler’s Wright Electric plans on a 150-seat distributed electric propulsion machine.  Other potential contenders at this point seem to be more interested in creating smaller, lower-range craft.

Wright Electric could carry requisite passengers, but could it make the distance?

“Note: Aircraft using bio-fuels and synthetic aviation fuels are excluded from this Prize.

“A representative of Carbon Footprint Ltd must be on-board the aircraft to validate the legitimacy of the flight.

​“The first person, company or team to do this will be awarded the Freedom Flight Prize Fund and take their rightful place in aviation history.” 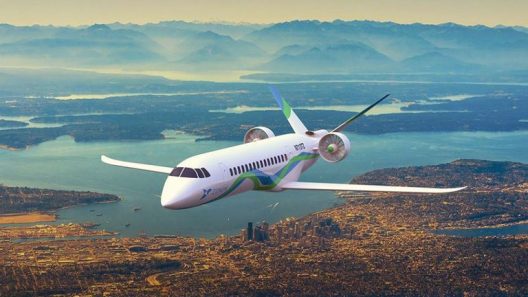 Boeing offshoot Zunum was not planned to be over 50 passengers

“Carbon Footprint Ltd holds the right to update the rules from time to time. This may include clarifications and corrections, but will never change the ultimate goal of the Freedom Flight Prize which is enabling zero carbon aviation.

​“*Airports must be within a 50 mile radius of these cities. The route can also be the other way round i.e. New York to London to New York.”

Details for how to enter the competition can be found here.

The shortest air distance between London and New York is 3,462.42 miles, the great circle route distance Charles Lindbergh achieved in his 1927 flight.  That means the aircraft can cruise at around 350 miles per hour (perhaps a little more to make up for altitude gain and approach descent), enough to complete the trip in the 10-hour limit.  This is 63-percent of the average 550 mph of current jetliners.

These are important points.  Doubling the speed of an airplane increases the drag by the square, meaning an equivalent airplane traveling twice the speed of another will generate four times the drag.  Even worse, from what your editor understands, Power required for that doubled speed goes up by the cube factor.  The faster airplane will require eight times the power.

This probably helped set the rules for the 2011 Green Flight Challenge, batteries being what they were back then.  The 200 mile route and 100 mph cruising speeds led to extraordinary passenger miles for energy equivalent to that of gasoline.  Interestingly, the four craft that took part in that competition are still flying and achieving new levels of economy and performance.

Carbon Footprint Ltd. is an international operation that seems to be on every continent except Antarctica, promoting carbon reduction projects from clean stoves for developing nations to reducing deforestation and implementing clean energy projects.  They seem well connected and fully capable of managing this project to fruition.

John Buckley, Managing Director of Carbon Footprint Ltd, is an aerospace engineer, and founder of the Freedom Flight Prize.  He explained, “This is the revolution that I have been waiting my whole career for – the Freedom Flight Prize puts 100% renewable flights right in the spotlight in order to address the climate emergency we face. The Prize does not accept the compromise that long haul travel produces a high carbon footprint – in fact it recognizes that the technologies to power flights solely on sustainable renewable energy are available. We anticipate that the Freedom Flight Prize will propel the travel industry to deliver on the needs of the people and the planet.”

This might be an answer to the spate of “flight shaming” that held sway before the pandemic made such concerns moot.  If airlines can “clean up their act” in a significant way, many objections to their CO2 emissions and contrails may literally go away.

Just as the Orteig Prize drove Lindbergh to talk a small aircraft company in San Diego into building his Spirit, and the Green Flight Challenge inspired Tine’ Tomazic at Pipistrel to come up with the winning G4, today’s Freedom Flight Prize may cause the best designers and builders to come forth with something just as revolutionary as those past prize winners.  Luck to all.