HES Element One will fly four on 14 hydrogen-powered motors

A four-passenger, 14-motored (!) monoplane, Element One will carry the lucky foursome 500 to 5,000 kilometers (310 to 3,100 statute miles).  This distributed power system claims “virtually no change to its current drone-scale systems,” which is a little puzzling, considering the largest of such systems produces no more than 1,000 Watts.  The scale of the Element One and its power packs is ambiguous, with illustrations showing a nine-axle trailer with attached solar panels ostensibly powering the on-site production of H2. 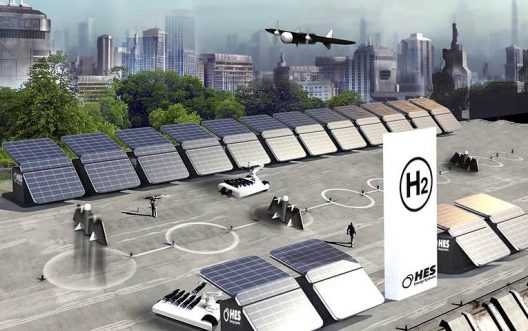 HES fueling station uses solar power to generate hydrogen, then stores it in easily swapped pods that plug into motors

One illustration depicts a drone-launching site with fuel pods possibly approximating the size of the units that will be used on Element One.  These are larger and their scale relative to the people in the illustration gives an approximation of their size. 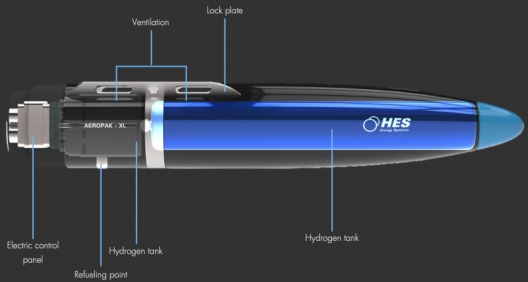 H2 containers plug into power modules, appear to have controls for interaction with motor

The pods are part of an autonomous refueling system developed by HES and its partner H3 Dynamics, working from Aerospace Valley, an R&D center in France.  They note, “One of H3 Dynamics’ divisions specializes in ultra-light hydrogen energy systems for aeronautical applications (drones), light mobility (soldier systems) or data capture in remote areas.”  This pairing has established partnerships with a wide variety of European firms, academic and industrial organizations. 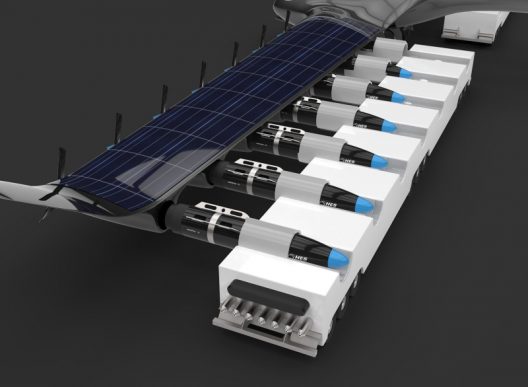 That range will enable greater performance than that of other technologies, according to HES founder Taras Wankewycz.  “It’s now possible to break past the endurance limits of battery-electric flight using HES’ ultra-light hydrogen energy storage in a distributed propulsion arrangement.  Element One’s design paves the way for renewable hydrogen as a long-range fuel for electric aviation.”  Range will depend on whether the hydrogen is stored in liquid or gaseous form, according to HES.

Much like other regional aircraft, Element One can open, “new aerial routes between smaller towns and rural areas using an existing and dense network of small-scale airports and aerodromes.”  As noted before in this blog, that vision parallels that of William T. Piper, who saw his Cubs and Tri-Pacers landing on grass fields all over rural America, connecting village and towns that would otherwise not have airline access.

On the infrastructure front, HES partners with Wingly, a French startup offering “flight sharing services for decentralized and regional air travel.”  Emeric de Waziers, CEO of Wingly, explains his firm’s hopes in this new field.  “We analyzed the millions of destination searches made by the community of 200,000 pilots and passengers on our platform and confirm there is a tremendous need for inter-regional transport between secondary cities”, says. “By combining autonomous emission-free aircraft such as Element One, digital community-based platforms like Wingly and the existing high-density network of airfields, we can change the paradigm. France alone offers a network of more than 450 airfields but only 10% of these are connected by regular airlines. We will simply connect the remaining 90%.”

To support that network of airports, “HES announced its plans to begin associating on-site hydrogen generation with fuel cell powered unmanned aircraft across a network of hydrogen-ready airports, in preparation for larger-scale electric aircraft such as Element One.  HES is now in discussion with industrial-scale hydrogen producers to explore energy-efficient refueling systems using renewable solar or wind energy produced locally.”

With plans to fly it first aircraft in 2025, HES has time to develop a viable prototype, test it, and make that craft ready for production.  Its plans are similar to that of the German HY4 flying into a “hydrogen-ready” network of regional airports.  Certainly, the expansion of solar-powered H2 in both countries will mean “clean hydrogen” could be a potent power source in the future.