HopFlyt Hops into the Next Decade

With 2020 lurching into life in some turbulence, HopFlyt promises a smooth, above-the-fray experience.  A look back at an innovative aircraft designer, the new variant applies electric power and new structural techniques unknown when Willard Custer had his inspiration.  HopFlyt is a modern interpretation of that vision, with distributed electric propulsion, 3D-printed components, and simplified control systems.

Willard was a far-sighted soul in the 1940’s, when aircraft were either all wood, all sheet metal, or mixed structures of wood, chromoly tubing and fabric.  The composites that freed designers for swoopier things were a few decades away.

Reputedly a descendant of George Armstrong Custer, Willard Custer envisioned a propeller in a semi-circular channel that might produce lift as well as thrust.  This blog channeled that history in an earlier article on HopFlyt in 2017.

While you can see real-life footage of the original channel wing concept in that entry, we turn to Tom Stanton, who built a small-scale version of the idea and collected data from a fairly-sophisticated test rig, load cells and all.

HopFlyt’s founders and executives are residents of Baltimore, Maryland, as was Willard Custer.  The three leaders have extensive aeronautical experience, and two were highly-experienced Marine pilots.

Rob Winston, founder and President, “Has been a pilot for over 35 years, 22 of which were spent flying high-performance military aircraft. His job experiences include former NASA Test Engineer; Operational Test Director and Operation Test Pilot for the United States Marine Corps; and Presidential Nuclear Strike Advisor.”  His awards include the National Defense Industrial Association, Marine Corps Test Pilot of the Year for 2004. 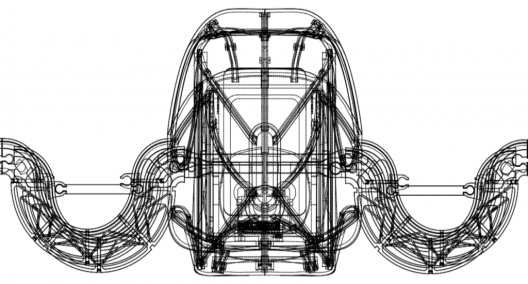 His wife, co-founder and Vice President at HopFlyt, Lucille Winston, “Is a former NASA Test Engineer with experience developing environment-ready hardware for satellites, the space station and the space shuttle.”

At HopFlyt, Lucille is leading the effort to integrate multiple electric motors, control, navigation and communications systems, while supervising the building, manufacturing and testing of the HopFlyt aircraft composite wings and propellers.  She has also helped create aviation combat survivability systems for many service branches. 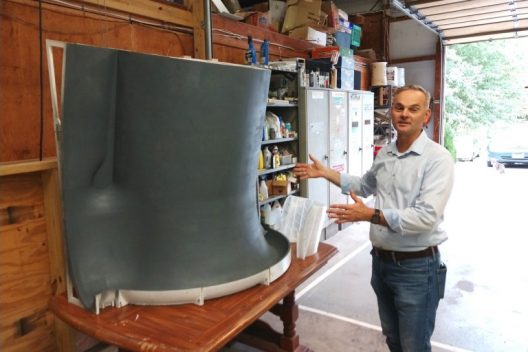 Full-size channel for one pair of counter-rotating propellers

Co-founder, Chief Financial Officer and Chief Test Pilot at HopFlyt, “Rory [Feely] is a military Experimental Test Pilot and Marine Corps aviator that has been flying high-performance aircraft for over 20 years.”  In four deployments, he flew over 300 hours in combat.   He has deployed four times and flown over 300 hours in combat. He has a BSc. in Physics (Honors), an MS in Aerospace Engineering and an MS in Technical Program Management.  Rory and the HopFlyt team want to save the world from traffic jams and exhaust pollution. 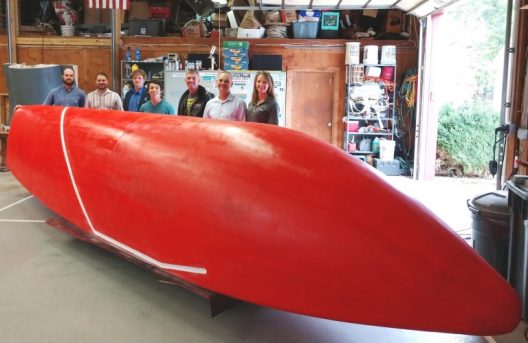 Here we see him promoting that vision in a 2019 TED Talk.  His “pitch” emphasizes the economic and environmental costs of continuing in the vicious cycle of gridlock and fossil fuel consumption.  His answer would save money, the natural world, and best of all, the time we now waste sitting in a single-occupant, idling machine being bored and frustrated.

HopFlyt is working to realize its design goals for its Venturi electric Vertical Take Off and Landing (eVTOL) vehicle.  Extremely different from Uber concepts and similar craft, Venturi will rely on the added lift of the channel wing to gain a potential advantage.  Its variable-incidence wings will allow the simplification of control, with no need for conventional ailerons, flaps, rudder or elevator.

The team is 3D printing full-scale parts and performing flight tests on models, again gaining valuable data that backs up what Tom Stanton demonstrated with his models.  As their work progresses, we can count on hearing more from Baltimore.