Flown by Andrew Dixon, that and a subsequent flight gained extra publicity for “a James Bond stunt pilot*” helming the first electric aircraft capable of carrying passengers from a United Kingdom airport.  Dixon reported that the battery-powered Piper Malibu needed 10 per cent less distance for take-off and climbed faster than normal.

The Airplane Was the Real Star

Reflecting the high-flying status of the test pilot, the airplane, part of a government-funded “HyFlyer” project, flew two missions on two days of 15 and 25 minutes each.  Its two automotive-based batteries easily carried the six-passenger aircraft on its tours of the Bedfordshire countryside.

The second of two Piper Malibus to be converted by ZeroAvia, the craft will be converted to hydrogen power before an October or November “300-mile flight from Orkney to an airport on the Scottish mainland.”This would be a predecessor to a line of fuel-cell aircraft that could include a 19-passenger medium-range commuter craft. 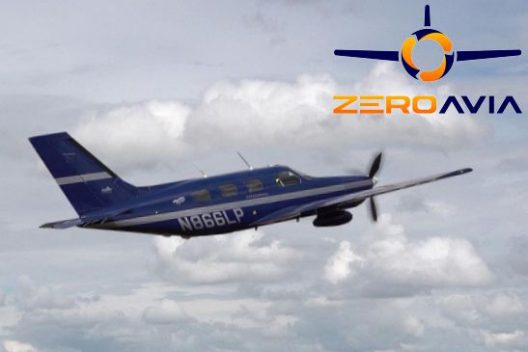 Business Green.com reports that, “Having demonstrated its new electric drive train the company intends to develop a hydrogen fuel cell powertrain and convert a 19-seat aircraft to run on hydrogen that could be in commercial use as early as 2023.”  The report add, “Yesterday’s test flight came on the same day an EU-backed study assessed the potential for hydrogen-powered flight in Europe, predicting that with supportive regulatory, investment, and policy signals the technology could become a major player for short to medium haul plane journeys within 10 to 15 years.”

ZeroAvia is partnering with the European Marine Energy Centre Ltd. and Intelligent Energy, manufacturer of what they claim to be the lightest and most powerful H2 power systems.  Over a decade ago, IE was promoting a fuel-cell scooter, and later tested the system with the Metropolitan Police in London.  They have developed small-scale systems for unmanned aerial vehicles (UAVs) and are collaborating with ZeroAvia on larger units.

Valery Miftakhov’s company biography shows a unique skill set and background that enables his work with ZeroAvia. “Val Miftakhov, ZeroAvia Founder and CEO, is a serial cleantech entrepreneur who knows how to scale technology for use by existing transportation industries. Val’s previous venture, eMotorWerks, developed smart vehicle-grid integration hardware and software, and was acquired in 2017. eMotorWerks’’ JuiceBox Smart EV charging station is the best selling product in its category in the United States for the last 5 years. Before eMotorWerks, Val held executive business strategy & operations positions at Google, McKinsey & Company, and Nielsen. He also launched and managed three startup companies, in all of which he held the CTO positions. Prior to his industry experience, Val was a high energy physics researcher at Stanford Linear Accelerator, a Department of Energy facility. Val received his PhD in Physics from Princeton University and his MS in Physics from Moscow Institute of Physics and Technology. He was a two-time winner of the Nationwide Russian Physics Competitions. In whatever spare time he gets, Val tries to get good use out of his airplane and helicopter pilot licenses.”

To help promote his company’s mission, he has authored to sponsored articles in Forbes Magazine.  “Is Electric Flight Aviation’s Next Era of Innovation?” reviews the startups and companies “…already already creating promising products and prototypes,” including, of course, ZeroAvia.  “Aviation Is The Driving Force Of Hydrogen” explains “Requirements for extreme energy density, high cycle frequency and lack of biofuel scalability will make hydrogen-based aircraft propulsion a virtual necessity in our carbon-neutral future.”

ZeroAvia is not in this effort alone, being funded by the UK government agency Innovate UK and the Aerospace Technology Institute (ATI).  Dr Simon Weeks, chief technology officer at ATI, praised the program.  “The ATI is delighted to see the first flight of ZeroAvia’s battery-electric aircraft at Cranfield.  This exciting ATI funded project is the next step in an effort to develop a commercial zero emissions hydrogen fuel cell powered commercial aircraft in the UK.”

European Marine Energy Centre will provide clean hydrogen for future flights, “made by an electrolyzer powered by wind turbines, so there will be no greenhouse gas emissions.”This is similar to the vision of Pipistrel, which foresees cheap H2 made by non-fossil-fuel means.

Academic and practical assistance will come from Cranfield University, which has a significant aeronautical department.  “Cranfield Aerospace Solutions (CAeS) will assist with integrating ZeroAvia’s powertrain into the Piper airframe and host the ZeroAvia team at their hangar facilities. With its expertise in airframe integration and modification as well as whole aircraft design, CAeS brings the best of the UK aerospace industry into this collaboration.”

ZeroAvia seems well on its way to its goals, having secured an Experimental R&D certificate at its Hollister headquarters necessary permits and certificates in the UK.  The company feels it’s “on track for commercial operations in 2022.”  Suddenly, hydrogen, which has always been the fuel of the future, seems much more imminent.

*Besides acting as a training captain on Sally B, the last airworthy B-17 in Europe, Dixon has flown stunts on the Father Brown TV series, and in the James Bond films Spectre and Quantum of Solace.