Most such medical deliveries are usually over land and within urban areas. Fixed-wing drones flying with Zipline in Rwanda deliver clinical samples and blood 80 kilometers (49.6 miles) each way out and return. 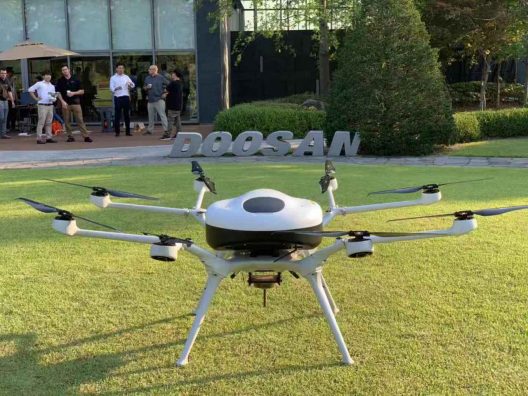 The Doosan Mobility Innovations (DMI) DS-30 drone is a large machine able to carry a 10.8 liter, 4.3 kilogram (9.46 pound) compressed hydrogen container – good enough for two hours endurance.   There was 30 minutes’ supply left in the tank when the drone landed on St. Croix.   The machine can carry up to a five-kilogram (11-pound) payload.

Members of Guinn Partners worked with Doosan Mobility Innovations, in collaboration with Skyfire Consulting, and the US Department of Health, to execute the delivery.

The DS-30’s capabilities can be a literal life-saver for patients.  NewAtlas reports, “According to Guinn Partners, it can ordinarily take up to a week before patients’ biological fluid samples are transported between the two islands by manned aircraft – in the case of illnesses such as Dengue fever, the infection can progress to dangerous levels within that amount of time. Because using a drone is much cheaper and simpler, though, samples could conceivably be sent to St. Croix immediately.”

Although the recent flight relied on control from a boat trailing the drone, future outings will be autonomous.

The H2 tank on the DS-30 is capable of withstanding shots from a large military rifle round, based on illustrations provided by Doosan.  That, and the simple approach to transporting tanks and connecting them to the drones indicates a well-though-out approach to logistics.  The one thing that might prevent broader adoption of the system is the need for DMI to supply the already-filled tanks, with “empties” returned like deposit beverage containers.