Their web site proclaims, “HyPoint, Inc. is developing the next generation hydrogen fuel cell system with zero CO2 emissions and game-changing energy performance for the air transportation and urban air mobility market.”  Pointing out a “fundamental barrier at a chemistry level” for lithium-ion batteries, the fuel cell maker launches some seemingly outrageous claims.

As we have reported here, demonstrated outputs for lithium-ion cells are around 350 Watt-hours per kilogram, and about 260 Whr/kg at the pack level.  HyPoint says it can already demonstrate a system-level specific power of 1,000 Watts per kilogram and an energy density of 530 kW-hr/kg.   The company points to its next generation of “turbo air-cooled” units to produce even more power and show better energy density.

These improvements would make the fuel cell a candidate for aircraft use, according to HyPoint.  Already collaborating with ZeroAvia and Urban Aeronautics, HyPoint hopes to supply airworthy systems by next year. 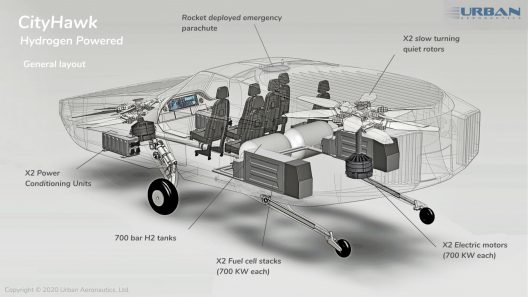 Urban Aeronautics, which is pioneering the next generation of eVTOL aircraft for commercial air taxi and air rescue roles, and HyPoint, a leader in next generation, high power (HTPEM) hydrogen fuel cell systems, will explore the development of an advanced version of Urban Aeronautics’ CityHawk eVTOL powered by HyPoint’s cutting-edge, hydrogen fuel cell stack technology. As currently designed, CityHawk relies on hybrid propulsion.

Mass-produced,HyPoint’s current fuel cells would cost about $800 to $1,000 per kilowatt.  The cost per kilowatt-hour would depend on the cost of hydrogen flowing through the cell.  HyPoint is apparently counting on their new “turbo air-cooled” units to lower that cost, although they are reluctant to disclose what the cell costs will be.

Tesla’s “Roadrunner” project aims to lower battery prices to $100 per kilowatt-hour.  For battery electric vehicles, that is a set rate (increasing slightly over time as the battery capacity is reduced in use).  Charging costs should decline over time, as solar cells and wind turbines become more efficient and less costly.

Several sources challenge the idea that hydrogen power can operate cars (or airplanes) more cheaply than electricity stored in batteries.  Inside EVs, for instance, reports that Volkswagen is trending toward batteries exclusively, stating somewhat provocatively, “In the case of the passenger car, everything speaks in favor of the battery and practically nothing speaks in favor of hydrogen.”

Fred Lambert, writing in Electrek predicts, “Though hydrogen certainly has more potential with semi-trucks than passenger cars, it’s still not likely to triumph over batteries for powering the next generation of zero-emission transport.

“As we have often explained before, the entire end-to-end process from production to consumption is 3x times more energy efficient for battery-powered vehicles than hydrogen fuel cell vehicles.”  This was written three years ago, and things in both battery and fuel cell worlds have changed considerably.  It’s interesting that Lambert felt enthusiastic enough about his ideas at that time to use no less than four exclamation points in his caption to the diagram below. 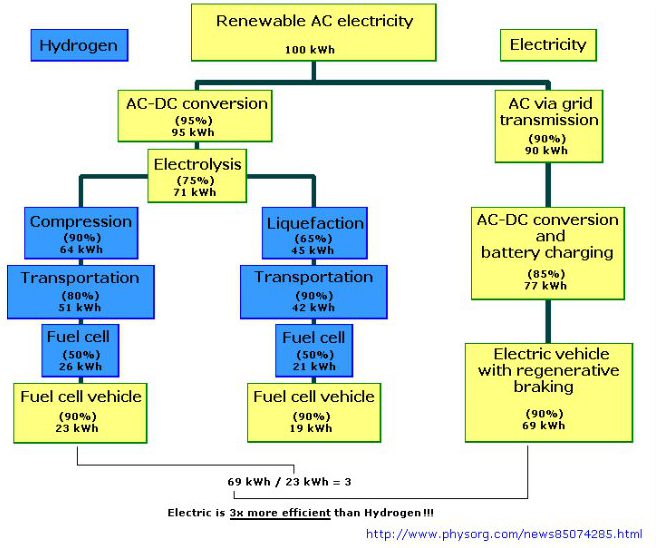 What hope is there for hydrogen fuel cells in aircraft if the numbers tend to favor large stationary installations or their use in large vehicles such as buses or class 8 trucks?

As we described 11 years ago, “Gerard Thevenot, a long-time championship-level hang-glider pilot, celebrated the centennial of Louis Bleriot’s flight across la Manche (the French name for the English Channel) by flying his hydrogen-powered La Mouette hang glider over roughly the same route Bleriot took between Calais and Dover on August 6, 2009.”  Later reports showed the flight used 755 grams (1.66 pounds) of H2, a great deal less than the amount of fuel a howling two-stroke engine might have consumed.

Today, several firms are exploring H2 aviation.  ZeroAvia, flying both Hollister, California and Cranfield, England, is using avgas and hybrid setups so far, but will switch its proof-of-concept Piper Malibus to hydrogen power in the near future.  They are partnered with HyPoint, so we look for flight tests by next year.

The Alaka’i Skai is intended to fly on H2 from the beginning.  The four-rotor UAM will have a range of hundreds of miles, rather than dozens like its battery-powered competition.

Reported in New Atlas, Rafi Yoeli, CEO of Urban Aeronautics says, “We look forward to collaborating with HyPoint on the integration of the next generation of hydrogen fuel cell systems for eVTOL transportation and the urban air mobility market. As a high-power, 100 percent environmentally friendly fuel, hydrogen is key to the future of eVTOL aircraft.” 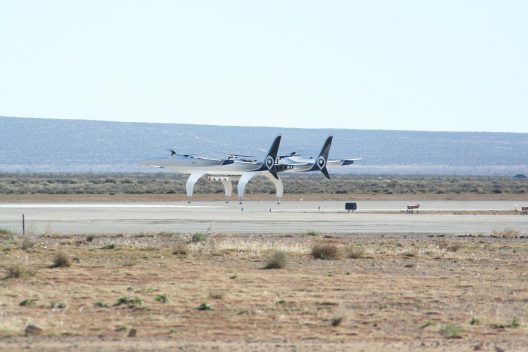 Red Jensen shared this photo of a strange craft at Mojave Airport.  One Redditor speculated, “The tail number N971YT is registered to Toyota. It’s an electric aircraft which I find interesting considering their vehicle’s are known to favor hydrogen fuel cells as their alternative fuel choice instead of electric.”

Toyota promotes fuel-cell-powered trucks and its Mirai passenger car.  It gave Joby Aviation $394 million in January, so one wonders about the direction future flight might take with this partnership.

Where Will This All Go?

Obviously, proponents on both sides of the fuel cell/battery debate are well dug-in on their positions.  We need to do a less biased, more measured look at the trends and potential for each system.  In coming entries, we’ll try to give as objective a look as possible at these energy sources.