Look What Fred To Started!

Forty years ago today, Fred To’s Solar One flew the length of the runway at Lasham Airfield in Hampshire, England, solely on the energy derived from the weak winter illumination and stored in a small set of ni-cad batteries..

With his partner David Williams, he had built the wooden, model-aircraft-like structure in a farm building, visited by the farm’s horses and pigs. 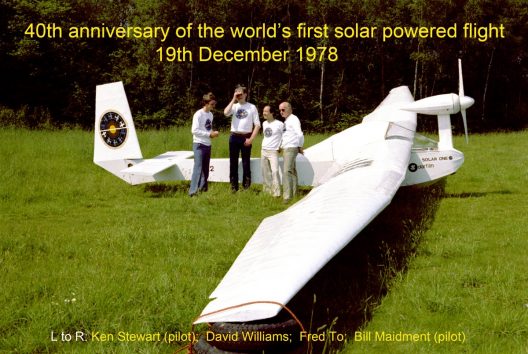 The airplane went on to be displayed at various airshows, and Fred went on to build an inflatable 100-foot-span flying wing that was the first to use “fly-by-wire” technology.  His inventiveness and design skills have informed many projects, as we reported in our November 2018 report on the award ceremony Fred recently attended.

In short form, much has happened since then  Larry Mauro flew his Solar Riser ultralight at Flabob Airport, California on April 29, 1979.  Much like Fred, who had limited funds, Larry could could install only 350 Watts of solar panels on his wing, a limitation that required three hours to charge the craft’s batteries, and allowed an 800 meter (2,600 foot) flight at between one-and-one-half and five meters (five to 16 feet) altitude. 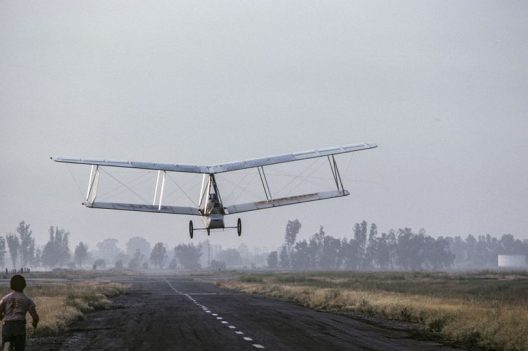 Both had to make do with small motors (Solar Riser had on five-horsepower motor: Solar One had four small motors ganged together with a belt drive).  Their solar cells were low-efficiency items and ni-cad batteries stored a fraction of the energy today’s best lithium-ion cells manage.

Fred and Larry were true pioneers who had grand aspirations.  Even they could not have seen the rapid progress started by their early efforts, though.  In 1981, Paul MacCready’s team flew Solar Challenger from Paris to England.  In 1991, Eric Raymond flew Sunseeker 1 across the United States.  With the kind of financing Fred To and Dave Williams would have only dreamed of, Solar Impulse flew around the world on solar power – the pinnacle so far of what’s possible.

But we owe Fred To the honor of that grand first – the first solar-powered, human-carrying flight 40 years ago.