On to the North Sea, Electrically

A team in Switzerland attempted an elektroweltrekordflug, an electric world record flight, hoping to set seven world records in one 700-kilometer trip. Flying a new, certified Pipistrel Velis, the team of Marco Buholzer and co-pilot Morell Westermann hoped to find their way into the Guinness Book of World Records for the following:

The team made much the same point that Gabriel DeVault made in accepting the MacCready Prize at last year’s Sustainable Aviation Symposium. “Anyone who drives an e-car knows that the route Zurich-Norderney is no longer a problem with an electric car. With the electric airplane, however, it is a modern adventure, a flying expedition from the Alps to the North Sea.” 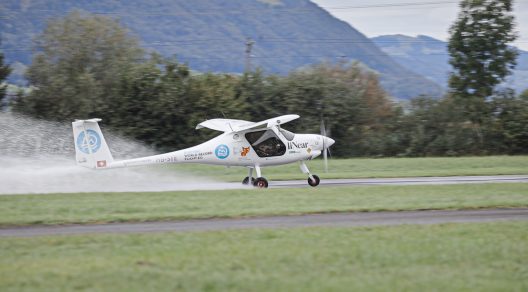 Following a one-day weather delay, the trek went fairly uneventfully. On Sunday morning, August 30, over 100 people and 50 electric cars crowded the airfield at Schänis (LSZX), with a pop-up e-mobility show and a Futuricum e-truck on display. Planned to start around 10:00, the world record flight was primed to head for Donaueschingen (EDTD), where it was scheduled to land around 2:30 local time. Weather, unfortunately, was damp and dismal, but didn’t dampen the crowd’s enthusiasm. The party went on, but the flight didn’t – until the following morning, when the little Velis hopped into the air and made its way north.

After a recharging stop in Birrfeld on Switzerland’s northern border, the pair of pilots navigated to Donaueschingen airfield. Hans-Jürgen Götz reported from the flight’s first stop in Germany that, “Anyone who thought airplanes were loud and only burn fossil fuels was taught a different story on Monday. Shortly after eleven o’clock the first civilly registered electric airplane landed… almost silent and purely electric.”Buholzer and Morell were met by “around 50 electric vehicle enthusiasts from the region.” 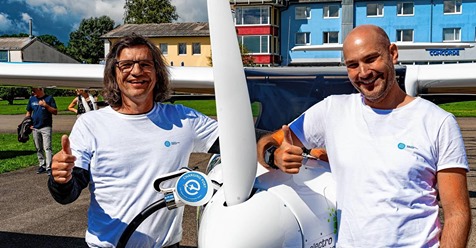 At Bad Dürkheim (EDRF) the team was promised “serious” hospitality and “a great audience program.” They were not disappointed. Food and beverages and dozens of electric cars and their owners were on hand. The team held forth with a mini lecture about the trip up to that point and the project.

That busy afternoon saw stops at Lahr airfield (B140), Karlsruhe / Baden-Baden Airport (FKB), and a well-deserved overnight stay at the Flugplatz Bad Dürkheim.

An early departure from Bad Dürkheim took the team to the Mainz-Finthen Airfield. After recharging with the gear the support crew carried in their automobiles, the airplane departed for Siegerland Airport in Burbach. Three hours later, the Pipistrel and the small convoy of support cars left for Meschede-Schüren Airfield, on the well-named Otto-Lilienthal-Strasse. A final arrival at the Flugplatz Münster-Telgte was followed by a community celebration.

Wednesday to the North Sea

Another early departure took the pilots to the civil part of the Diepholz Air Base – ETND. A short stop there enabled a takeoff for Westerstede-Felde Airfield, a lovely field in the midst of sylvan greenery.

A last short hop ended the trek at Norderney Airfield, where they were greeted by the local fire department and a welcoming committee that included the local mayor. 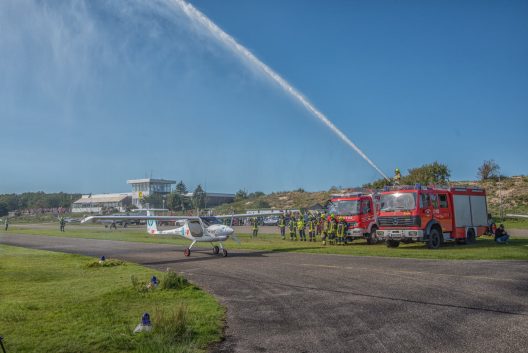 Much like Gabriel DeVault’s flight around central California, the crew included a team that drove ahead with chargers and a special pair of data recorders for the record declaration. They describe their coordination. “As soon as we got out, the charging cable was immediately plugged in. After all, it should move on quickly. Since there is no charging infrastructure for electric aircraft at any airfield, a team with the electric car and a charger will each drive ahead to the nearest landing site.”

The Team takes a bow at journey’s end

The flight back to Schanis simply reversed the stops going home. After all, the team was available to charge things, and there was even a Green Motion charging station at Birrfeld’s Flugplatz.  We don’t know if Guinness has validated the seven records for which the flight was destined, and we will be reporting that outcome as it becomes known. Congratulations to all who made this historic flight possible.

Next post: US Department of Energy Announces Funding for Electric Aviation