Pipistel and Delft Technical University have introduced hydrogen (H2) powered, 19-seat airliners for the intermediate-range market.  Both are unique configurations with unique propulsion concepts.  Both attempt to lower drag through the use of their propulsive systems.

Pipistrel announced their Miniliner concept as a response to a “significant market potential” for a “zero-emission airplane in the 20-seat size class, capable of operating quietly from runways shorter than 1 [kilometer], including grass airstrips at small aerodromes.”  Seen as a disruptive element in providing service to currently unserved areas within a 200 to 1,000 kilometer (124 to 620 mile) range, the Miniliner could also serve as a microfeeder craft between small airports and large hubs.

Although Pipistrel is somewhat mum about the internal and powerplant details for the craft, the propeller locations seem to indicate a major effort to reduce drag and eliminate wingtip vortices.  The tail, for instance, is very much what Bruce Carmichael, a proponent of laminar-flow designs, proposed for light aircraft for decades. 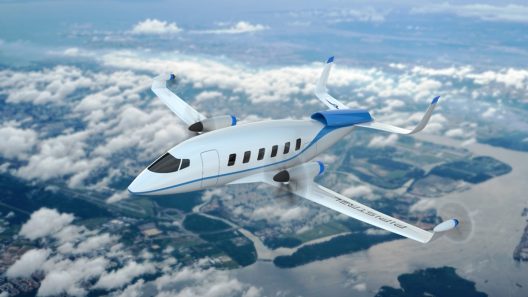 This is the only rendering of their Miniliner Pipistrel has released, part of a quiet introduction that avoids details

Pipistrel is now working to overcome the “40-year-old designs, powered by fuel-burning, noisy and maintenance-intensive turboprop engines, currently in service.  They hope to be part of UNIFER’s mission of turning out zero-emission craft that will “allow for a Direct Operating Cost (DOC) reduction of 30 to 40 percent on a per-seat metric relative to today’s solutions.  Advanced flight automation technologies will “facilitate single-pilot operations.” 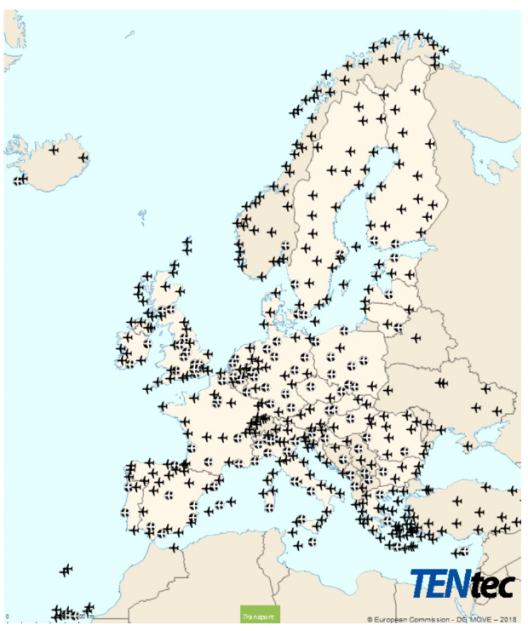 The company sees an Entry into Service (EIS) of 2028 to 2030, without major large infrastructure investments.  With various European Union and multiple industry partners, Pipistrel foresees regulatory and operational acceptance.

Pipistrel designer Tine Tomazic explained to Flight Global that the maximum take-off weight will be around 8,500 to 9,000 kilograms (18,700 to 19,800 pounds), “slightly above the 8,618kg upper limit for CS-23 aircraft.”  He feels that good relations with regulators, made possible by the successful certification of the Velis Electro, may enable some relaxation of those limits.

Since clean hydrogen production and distribution is a growing factor in Europe, Pipistrel’s Miniliner will benefit from an increasing readiness to service fleets of 19-seat H2-powered aircraft.

As explained on the project’s web site, “The Greenliner was designed during the Design Synthesis Exercise which is the final graduation project of the Aerospace Engineering Bachelor program at the Delft University of Technology.”  It’s rather astounding to think this was designed by 10 students in 10 weeks.  They received well-deserved high grades and the 2018 Anthony Fokker Prize from The Dutch Aerospace Foundation.

Their 134-page technical report, encompassing the range of disciplines involved, is evidence of the many overnighters they must have pulled putting the design together.

The team’s report indicates use of Magnax AXF 185 motors, “[an] 8[kilogram] (15.4 pound) unit with a diameter of 185 [millimeters] (7.2 inches) and peak power output of 100 kW (136 hp).  The company is envisioning the use of these motors in everything from electric motorcycles and vehicles to electric aircraft, and even in large wind turbines when used as generators.”  This total output of 1,800 kilowatts (2,448 horsepower) gives a power loading of only 3.58 kilograms per kilowatt or 6.8 pounds per horsepower.  Compared to a Cessna 150’s 16 pounds per horsepower, this should provide excellent short-field performance and climb rates.  The Greenliner’s specs would be the equivalent of a Cessna 150 powered by 235 hp!

Greenliner’s wing is a clean design set far back on the fuselage, probably to delay interference drag, but also to compensate for those 18 motors set even further back.  This places the three-abreast passenger compartment over the wing, probably reducing trim drag for varying passenger loads. 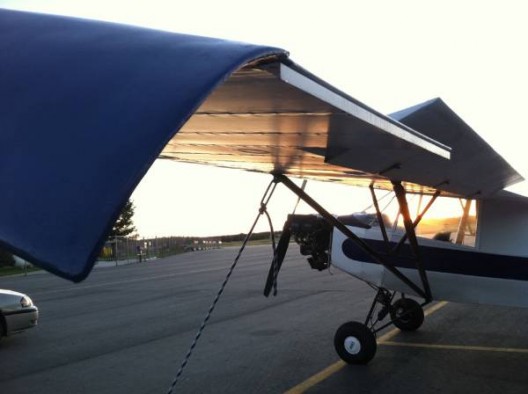 “Valdez Cubs” regularly show up at Oshkosh to show off their STOL chops. This trailing edge shows Gurney flap

The students even applied a trick used by Valdez STOL competitors, placing a Gurney flap (named for the great racing driver) on the trailing edge and getting a boost in the lift/drag ratio.

In the video, Marco Delgado Schwartz, a member of the 10-student team that designed Greenliner, explains the reasoning behind the craft and why it is important to the future of the environment.

With a range of 925 km (575 miles), the Greenliner can cover 80 percent of all flights in regional aviation.  Its 19 passengers means it can be certified within both CS-23 or CS-25, European Union regulations that are compatible with FAA requirement.  Its maximum takeoff weight of 6,450 kilograms (14,220 pounds) enables operations from 1,500-meter (4,921-feet) runways, covering a vast majority of smaller airports.

Emitting only water vapor over their routes, these two 19-seat, H2-powered airliners will be capable of delivering passengers to formerly unserved areas and and expanding network of regional airports.  Let’s see similar plans for the U. S. infrastructure.