For the last year or so, Bye Aerospace has grown a burgeoning order book, with over 700 aircraft on call, but only one or two real-world examples flying.  That’s changing now, with a new motor from Safran and Composites Universal Group (CUG) assembling an actual production eFlyer 2 fuselage.

Parts of the video may seem like comparing apples and bananas, or even cumquats, with aircraft of different missions and levels of development (the Airbus eFan having left the building years ago), but several points of interest remain.  Where are 92 kilowatt-hours of battery hiding in the 662 kilogram – 1,459 pound airframe (empty weight)?  That’s equivalent to the energy of an early Tesla S and probably a significant chunk of the total aircraft weight.

Bye has been busy formulating the design of is two- and four-seat aircraft, dropping its original plan to bedeck its wings with solar panels, and running though a gamut of available power plants.  Originally finding Siemens motors to be a viable choice, the team underwent a branding change when Rolls-Royce bought out the Siemens aero-motor line.  This did not require changing anything other than the decals on the nose of Bye’s aircraft.  Now, however, a major change involves some actual re-engineering. 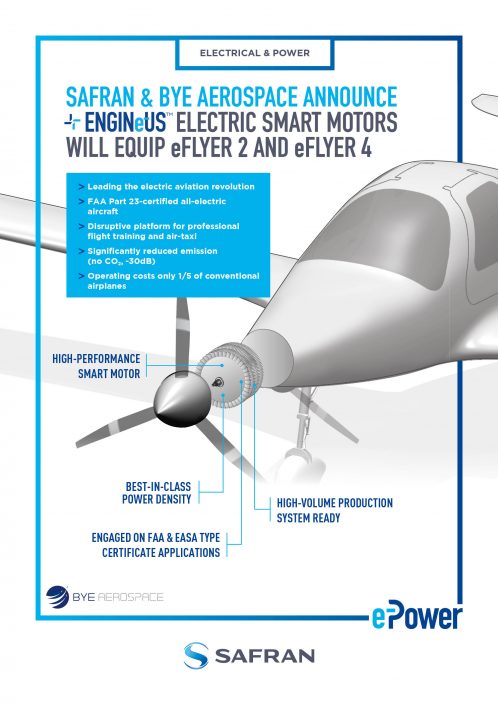 Bye Aerospace and Safran Electrical & Power have signed a Cooperation Agreement to equip eFlyer 2 and eFlyer 4 aircraft with ENGINeUSTM (ingenious, no?) electric smart motors.  Emissions and cost benefits are almost a given for electric propulsion.

Safran’s  ENGINeUS TM 100 product line will power the eFlyers.  The motors feature air cooling (with liquid cooling as an option), an integrated motor/controller configuration, and a structural design that withstands all propeller shaft loads.  All motors seem to be based on modular components and manufacturing techniques that enable high levels of automation, including automatic winding (presumable for coils and other wire-wound components).

George E. Bye, CEO of Bye Aerospace, explains, “Bye Aerospace has concluded that Safran’s ENGINeUS TM 100 smart electric motor is the optimal production solution to meet the requirements of our rigorous FAA and European Aviation Safety Agency (EASA) certification schedules for eFlyer 2 and eFlyer 4.  Our list of future eFlyer purchase agreements, currently at 711 units, continues to grow, and we must continue forward at a high-tempo pace to meet the demands of aviation enthusiasts worldwide who have been waiting years for all-electric airplanes to come to market.”

An Airframe on Which to Hang a Motor

Bye has chosen, “Composites Universal Group (CUG) to begin assembly of the production eFlyer 2 fuselage, the first major component being assembled.”  Serial number 001 will proceed even while FAA Part 23 certification for the eFlyer 2 goes forward.

Steve Ruege, CEO of CUG, added, “Composites Universal Group is extremely proud to have been selected by George and the team at Bye Aerospace to begin tooling and construction for the all-carbon fiber fuselage for Serial #001 of the eFlyer 2 aircraft.  We all feel here at CUG that Bye Aerospace has absolutely hit a home run with this next-generation all-electric aircraft design.  We are very excited about working collaboratively with the Bye Aerospace team to achieve FAA certification and commencing production.” 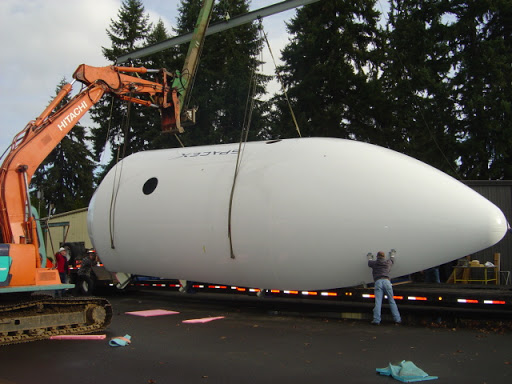 CUG is no latecomer to the party, having been in operation since 1994 and having partnered with Airbus’ A3 on its Vahana test vehicle, for example.  They build composite components for wind turbines, have a contract to make 34-foot long carbon-fiber seaplane floats for Kenmore Aviation, and have provided components for the Navy’s autonomous Anti-Submarine Warfare (ASW) ship, Sea Hunter.

Their facilities include a 45-foot long oven that can heat multiple small parts or very long large ones.  A large paint booth matches that capability, and they are soon to have an equally large autoclave.  They have an array of high-tech measuring equipment to ensure quality fit and finish for their products.  With their facilities only 28 miles from his home, your editor is looking forward to a visit when COVID clears up.

With new power and skilled manufacturing available, Bye Aerospace can look forward to getting those 711 airplanes to eager customers.  Bye’s statement of their hopes says a great deal about the benefits for all of us.  “All of Bye Aerospace’s current and future families of aircraft feature exemplary engineering, research, and electric aircraft solutions producing no CO2 and are designed to answer compelling market needs. These needs include five-fold lower operating costs, no CO2 emissions, and decreased noise. Bye Aerospace estimates the eFlyer will eliminate the release of millions of metric tons of CO2 each year for flight training alone.”