Eviation’s Alice Meets a Governor and a Mayor

Eviation’s Alice and MagniX’s motors got a visit from the Governor of Washington State and the Mayor of Arlington, where the nine-seat airliner is being prepared for its first flight.  Electric aircraft, so far, don’t command that big a portion of the daily press, so it’s heartening to see TV cameras and news reporters turn out. 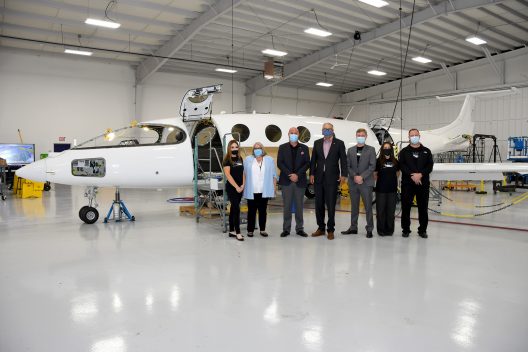 Eviation shared its take on Facebook.  “We enjoyed hosting @GovInslee and @barbtolbert today for an intimate look as Alice prepares for first flight later this year. They saw first-hand how our growing teams are working to make #electricaviation a reality.”

Governor Jay Inslee was already aware of the work motor company MagniX was doing when he acknowledged the May 28, 2020 flight of a Cessna Grand Caravan.

“The world’s largest all-electric aircraft took flight yesterday. And it was right here in Moses Lake, WA. Congratulations to @MagniX and all those involved.”  This referenced the Cessna Grand Caravan powered by a Magnix Magni500 motor.

In somewhat of a media turnabout, the Governor interviewed Roei Ganzarski, CEO of magniX and chairman of Eviation’s board of directors.

Commenting further on his airport outing, Governor Inslee posted on Facebook.  “Big day for the clean energy revolution being led by Washington. At the Eviation Aircraft Company in Arlington I toured the production facility for what will soon be the world’s first commercial all electric airplane, a nine seater. In Maltby I toured the Group 14 company which has created a world changing silicon anode battery technology that could increase capacity by 50% in our cars. Clean in the air, clean on the ground.”

What the Governor and Mayor Saw

Most impressively, they gazed upon a sleek aerodynamic shape waiting for its motors.  Janice Podsada of the local Herald Business Journal, reported, “It’s crunch time for Omer Bar-Yohay, CEO and co-founder of Eviation Aircraft, which is developing an all-electric airplane.”  As any home-built airplane maker knows, being 90-percent done means there’s 90 percent left to do”  The “crunch” in this case is mating the motors and batteries to the airframe, connecting and testing miles of wires, and performing ground-based reliability tests on every component.

Ms. Podsada reports, “’Every system and subsystem of the aircraft from structures to electronic performance and the batteries, the motor — all are being tested separately and then they’re tested together for functionality,’ said Bar-Yohay, who studied physics at The Hebrew University in Jerusalem.” 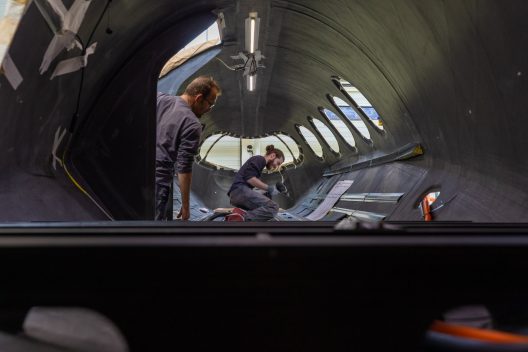 90 percent done, 90 percent to go.  Alice being fitted for what will be a luxury interior

Alice is primarily composite construction weighing a total of 16,500 pounds – 8.200 pounds of which accounted for by two battery packs.  Perhaps because of this, Alice was described by Bar-Yohay as a battery with an airplane painted on it.  And, as engineers will explain, the airplane lands weighing as much as it does when taking off.  Unlike petrol burners, electric airplanes don’t lose the weight of fuel consumed on the journey.  That’s one disadvantage – one perhaps overcome by clever design on aircraft like Alice.

Two crew members and nine passengers will have a nice trip in the 57-foot fuselage, carried aloft on 63-foot span wings, aerodynamically clean without the two wing-tip motors of the original configuration.  The 500-mile cruising range will be covered quickly by the plane’s 287 mph speed.

The Herald explains, “Eviation occupies three hangars at the Arlington Municipal Airport. MagniX is housed in a 40,000 square-foot building in south Everett near Paine Field.”  Only 15.8 driving miles separate the two parties, ensuring ease of communication and on-time delivery of components.

Getting in the air by the end of the year indicates a little pressure being applied to both manufacturers.  DHL Express has expressed a desire for 12 Alices, set up to carry 2,600 pounds of cargo.  Cape Air, a regional airline has a purchase option for an undisclosed number of aircraft.

Both carriers will appreciate the operating savings possible with electric aircraft.  Bar-Yohay told the Herald, “We estimate it will cost about $250 to $350 per flight hour to operate. A turboprop with similar performance costs between $1,200 and $2,000 per flight hour.”

Pat Anderson of Embry Riddle Aeronautical University (ERAU) told the Herald, “[Electric flight is] greener. It promises lower emissions and lower noise emissions.  I just think we have to figure out the battery weight issue, and I think that will simply take some time.”

Eviation announced a partnership with Clay Lacy Aviation to provide electric charging as part of its Fixed Based Operator (FBO) network of services. This partnership, “Will allow for the charging of Alice, its all-electric aircraft, at all Clay Lacy Aviation FBOs in preparation for the plane’s expected entry into service in 2024.”

Rendering of Alice in front of Clay Lacy’s FBO hangar

“In 2020, the company developed a comprehensive sustainability strategy to reduce its carbon footprint and the environmental impact of Clay Lacy Aviation facilities and its clients. Adding charging services for the nine-passenger, two-crew member, emission-free Alice is another step toward the two companies’ shared vision for a sustainable aviation industry.”

Previous post: Would an Electric LSA Kit Appeal to You?