Would an Electric LSA Kit Appeal to You?

Is there a need and desire for an electric light sport aircraft (LSA) kit that is inexpensive to own, operate, and maintain?  Electric flight already offers that possibility, and if kits were available to further lower costs, we could see a new way to achieve low-cost flight.  The LSA designation qualifies a builder to take advantage of LSA’s lighter constraints.

Shown only as an example of a potential kit LSA, Locus was a 2015 concept

A good friend who happens to have designed an electric Light Sport Aircraft (LSA) kit a few years ago let the project lapse because of the need to tend to other business interests.  He wants to know if there’s a market for a new, improved version of his original concept – an electric LSA that would fly for considerably less in operating costs than an internal-combustion model, and that would provide reliable, safe sport flying.  He provided the following survey to the Experimental Aircraft Association, which created the link at the end of this entry.  His comments follow.

Sonex Xenos was converted to eXenos by Gabriel DeVault. Kit aircraft could be a way for enthusiasts to access electric aviation

“This survey is being conducted to assess interest in an Electric Light Sport Aircraft that will be commercially available initially as a home-build kit.

“The aircraft is composed of a lightweight carbon composite material and incorporates many of the latest aerospace technology innovations to make electric flight highly cost-efficient. The Electric Light Sport Aircraft will have up to 2.5-hour endurance, an approximate 200-nautical mile range, and a useful load that allows for two adults on-board while complying with all FAA Light Sport Aircraft Rules. The Aircraft will have a designed takeoff run of 800′ and a landing run of 600’ at sea level, with economy cruise speed of 75 KIAS. The projected direct operating costs will be ~80% less than a typical gasoline powered light sport aircraft and, if equipped with the factory available energy storage device, will cost approximately $11 per flight hour based on national average electricity rates, and will require minimal maintenance. 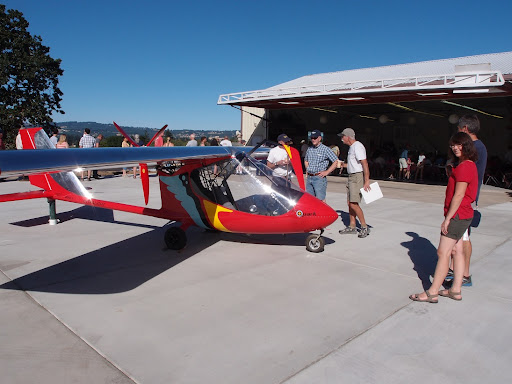 eGull “Quark” built by Martin Koxxy has been a big hit at Oregon fly-ins. Built from a kit, the design now has several owners who have flown electrically

“The Electric Light Sport Aircraft Kit will be available in several variations depending on the desires of the home-builder and could include enhanced safety options such as a Ballistic Recovery System and advanced designs for battery management and containment. Future feature-development contemplates integrated avionics for collision avoidance, flight envelope exceedance-protection, and other embedded intelligence to ensure safe flight and ‘take me home’ auto-land controls.

Click on this link to take you to the survey.  The combined wants, needs and collective intelligence of those who seek the future can make this a significant step in the path to green aviation.

Next post: Eviation’s Alice Meets a Governor and a Mayor