GoFly Prize Will Have a Sequel

A well-produced video looking like a Christopher Nolan trailer for an upcoming Batman film — Silverwing’s preview of its coming attraction wraps us in a cocoon-like cockpit with a heads-up display to envy.  Silverwing’s S1 was one of 20 machines to show up at Moffett Field in Mountain View, California for the GoFly Prize flyoff.

As Beth Stanton reported in the May issue of Sport Aviation, the gathering represented the best of 854 teams from 103 countries who made it through the first phase of the competition over two years ago.  The attrition rate may seem high unless one considers the difficulty level posed by the contest’s constraints. 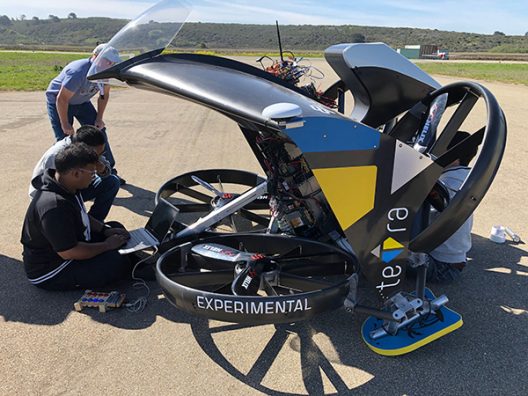 Beth’s article, “On the Edge of Possibility,” draws its title from a statement by Malcolm Foster, a GoFly judge and mentor, and director of special projects at GKN Aerospace.  He explained the challenge involved: “The eight-and-a-half-foot diameter with current battery technology was right on the edge of possibility.”  He referred to the size limit for the single-person-carrying vehicle that rise from and land within a 30-foot diameter circle with imaginary walls 12-feet high.

Beth expanded on the technical aspects  involved.  “A basic principle for hovering vehicles is to get disk loading as low as possible with a rotor that is as large as possible. Competition constraints limited the overall vehicle dimensions to eight and a half feet. It proved extraordinarily challenging to create a design using smaller rotors that would then require larger batteries to power it.”

Despite that, 20 teams from all over the world achieved at least partial success and showed up.  They came with complete vehicles, partially-complete craft, and some scale representations of what they hoped to achieve.  Foster added,  “It’s an extraordinarily difficult thing to do. There are very few professional designers who could actually come up with something successful within that envelope.”

One might be forgiven for not being able to recognize the aerodynamic qualities of many of these creations.  Remember that each was designed to meet a unique set of criteria.  Although none met with visible success this year, next year’s sequel may usher in a new era of personal, if quirky, flight.  Perhaps the ride will be as smooth as that of the Silverwing video.