Skydweller Aero, an adaptation of Solar Impulse technologies, is working with the U. S. Navy to provide ultra-persistent flight capabilities.  It’s using Solar Impulse Two, for which Skydweller purchased the assets and intellectual property rights.  Being flown in Spain at this time, the aircraft’s 2,900 square feet of solar cells provide two kilowatts of power, and may be augmented by hydrogen fuel cells in future.

Skydweller founders John Parkes and Robert Miller have headquarters in Oklahoma City, Oklahoma, but are performing flight tests in Spain, coordinating efforts with the University of Castilla-La Mancha (UCLM).

After successfully completing ground tests that checked the structure and control systems, Skydweller works toward crafting the software that will guide it on unpiloted missions, scheduled to last at least 30 to 60 days.  Such persistence, long sought by the military for ISR (Intelligence, Surveillance and Reconnaissance) missions, is also essential for many future civilian applications.  Co-founder John Parkes explained this to Aviation Today.   “There are certainly differentiated missions that Skydweller can do that no other aircraft can do, but the core of it really is doing things that we do today better, smarter, cheaper, more effectively.  And that is communications — being a node in the sky whether for the military and first responder market or for the telecom world. And for the military specifically, doing intelligence, surveillance and reconnaissance (ISR) missions from an airborne perspective more effectively.”

Certainly recent disasters such as the Bootleg and Dixie fires, which encompass broad areas and last weeks or even months, will require an “eye-in-the-sky” to help everyone from first responders to those performing reclamation efforts.  The idea of being able to observe in many spectrums can help speed search and rescue work, find lost or endangered people, and spot incipient hazards.  The possibilities are endless.

Aviation Today reports, “With 800 lbs of payload capacity, the drone can carry more radar and camera equipment than a MQ-1 Predator, whose primary role is reconnaissance and surveillance, though not as much as an MQ-9 Reaper, which often carries armaments as well.

“The U.S. Air Force recently announced it is looking for a Reaper replacement — called “MQ-X” — to enter service around 2031. Though the Skydweller wouldn’t be able to fulfill all of the capabilities of the Reaper, as it isn’t designed to carry armaments, it could offer greatly reduced complexity and operating costs for ISR missions.”

Parkes does not expect Federal Aviation Administration (FAA) or European Union Aviation Safety Agency (EASA) approval or certification soon, but does anticipate they will grant waivers for communications applications.  The aircraft is slated to meet FAA Part 23 certification requirements, however.

Integrating “its autonomy systems and ultra-redundant flight control systems…comprise the bulk of the [new] company’s engineering investment.”  Italian aerospace giant Leonardo invested in Skydweller and owns about 17 percent of the firm while controlling one of the seven board seats.  Skydweller raised a total of $32 million in its Series A fundraising, so it would seem well established.

A recent meeting between Skydweller and members of the University of Castilla-La Mancha planned, “Future collaborations on innovation, employment and internships for university students.”

The Government of Castilla-La Mancha has declared the future building of solar drones as a priority.   Their base will be located in the town of Valdepeñas (Ciudad Real), with the intent of “reactivating” economic development in the area.  It’s not stated whether the solar drones will be patterned after Skydweller or will be of different configurations.

Meanwhile, Back in Oklahoma

An electric motor that circumnavigated the globe by air in Solar Impulse 2 will soon have a new permanent home at Oklahoma State University.  Donated by Skydweller, the motor will reside at the school’s Unmanned Systems Research Institute (USRI). 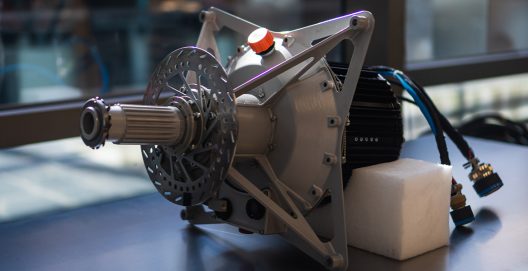 Dr. Jamey Jacob, OSU professor of aerospace engineering and director of USRI explains, “We are excited to be working with Skydweller Aero on their advanced technology. This is a unique opportunity for OSU students and researchers at USRI to work on cutting edge systems and push the leading edge of aeronautics.  OSU has been working on solar-powered aircraft for over 20 years, but this remains one of the hardest problems in aerospace engineering — to be able to assist in the pinnacle of solar flight is truly exciting.”

The USRI team will test the motor in a propulsion cell in its Excelsior laboratory, gather data, and “determine which projects will yield the most beneficial results.”

Skydweller’s CEO Dr. Robert Miller adds, “University research and development partnerships are one of Skydweller’s top priorities.  We are thrilled to be donating our electric motor to Oklahoma State University’s Unmanned Systems Research Institute and look forward to continued opportunities for collaboration.”

With two universities in Europe and America working to develop expanded capabilities for Skydweller, the future seems to open a wealth of possibilities.  We’re anxious to see what comes next.