Erik Lindbergh, grandson of the famed trans-Atlantic flight pioneer, has been paying his dues in aviation for decades, working to involve young people in career-building roles, and advocating for “green” aviation.  His latest roles have found him mentoring a group of Embry Riddle students in developing an electric HK-36 (shown last year at AirVenture), and in developing one of the over 100 electric vertical takeoff and landing (eVTOL) potential sky taxis coming into public view.  That sky taxi may not make it to market, but Lindbergh and partners’ Integrated Distributed Power system is headed that way.

At the 2017 AirVenture, he shared the news that he was working on something exciting.  That turned out to be the VerdeGo project, an eight-rotor eVTOL which he developed with co-founder Eric Bartsch and Embry Riddle Director of the Eagle Flight Research Center and Green Flight Challenge competitor Dr. Pat Anderson.  Eric is Chief Operating Officer for VerdeGo and Pat is Chief Technology Officer.

Their first product, the PAT200 Personal Air Taxi, is apparently on hold, according to eVTOL News, but the power system is being developed as a basis for other air taxis.  There should be a market among the other 100 developers for power systems that can elevate their Ubers. 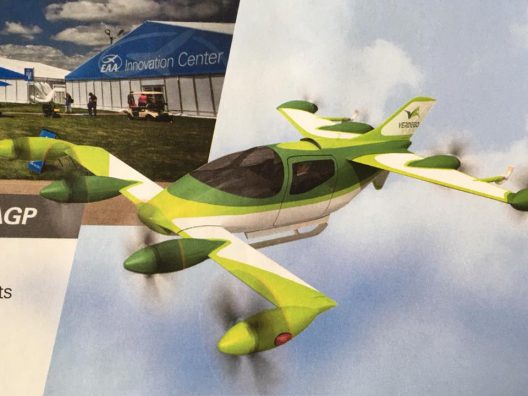 Aviation Week states the new business plan a bit more dramatically.  ” Seeing a dire need for propulsion expertise in the burgeoning electric vertical-takeoff-and-landing (eVTOL) market, one of the contenders has decided to put aside work on its vehicle and focus instead on providing hybrid-electric systems to other developers.”

Under development at the MicaPlex Aerospace Innovation Complex in the Embry-Riddle Research Park in Daytona, Florida, the Integrated Distributed Electric Propulsion (IDEP) system is “Balanced to optimize performing many functions for the aircraft.” 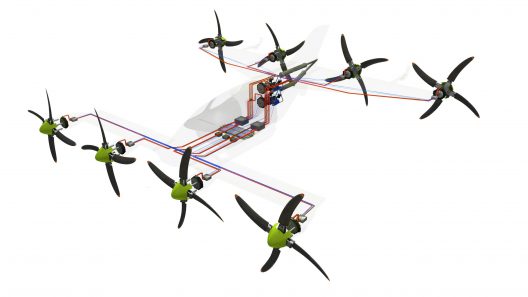 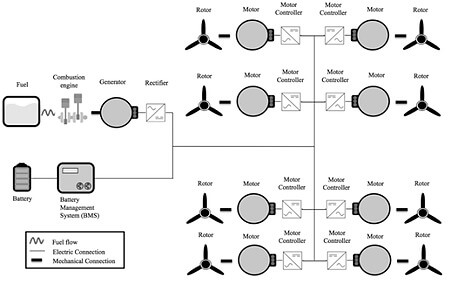 Approaches, according to VerdeGo, include “optimized multi-rotor arrays and low-noise generator installations.”  As opposed to “traditional propulsion, designed only for producing thrust,” IDEP provides “Propulsion Integral to All Aspects of Performance,” with a system architecture that has built-in redundancy.  Because rotors span the entire airframe, they enable distributed thrust and attitude control.  Rotors and motors act as an integrated pair.

In the traditional approach, propulsion units simply deliver thrust, relying on the airframe architecture design to create redundancy and attitude control.  IDEP provides both propulsion and control, with built-in redundancy (eight rotors) and attendant safety.  VerdeGo claims “today’s technologies… enable Urban Air Mobility to start NOW,” and add that the four-to-eight-rotor system will be, “Ready for UAM commercial launch in 2023.”

Longer-term programs, “Ready when high-performing batteries are available,” will combine battery power with other elements of the IDEP drivetrain.  VerdeGo estimates these systems will be available from 2030 to 2040 depending on quickly the battery industry can meet VerdeGo’s requirements.

Pat Anderson provides his own, somewhat indeterminate, estimate of when that will take place.  “Everyone has their crystal ball for the timing of new battery technologies.  We have been working for more than a decade with the global battery experts who project it will be 15 to 20 years before commercial levels of performance are achieved from a purely battery-operated VTOL aircraft.  VerdeGo’s first-generation IDEP hybrid systems enable aircraft manufacturers to get into the air with technologies available today, with an upgrade path as soon as batteries are available.”

In the meantime VerdeGo is crafting an “iron bird,” ground-bound test vehicle for the PAT200, which will now be used as a testbed for the IDEP systems.  Lindbergh adds, “We are doing all the steps as we would have before, but now we have opened up our propulsion system to all the competition.”