A Different Type of Kitplane

Green Aeronautics are moving beyond small beginnings into grander realms through ZeroAvia, Mitsubishi, and Alaska Airlines.

Gabriel DeVault has flown two different electric airplanes of his own, a converted EarthStar Thundergull and a Sonex eXenos (which seems to be his daily commuter between Hollister, California and his home in Watsonville).  Both have been featured prominently in his YouTube channel and your editor has written about them for Kitplanes magazine.  Now, Gabriel is working on a different type of Kitplane at a much large scale.

Gabriel managed research and design for the motor and related systems on the Zero electric motorcycle.  The original unit has gone through several upgrades, and is now seen in variants from 27 to 110 horsepower.   The company sold over 4,000 units last year in 30 countries including the United States.  They look to build at an accelerated rate, hoping to double sales every year.  He has taken that expertise to larger projects for ZeroAvia – looking to power much larger regional airliners.

ZeroAvia has bigger plans with much bigger powerplants and planes coming soon, though.

London to Rotterdam – and Back

According to Business Traveler, ZeroAvia, “is partnering with the [Rotterdam The Hague] airport, Royal Schiphol Group, and Rotterdam The Hague Innovation Airport Foundation on the initiative, which if successful will see a 19-seater aircraft operate between the two cities (London and Rotterdam).”19 seats are a nice point in commuter craft, which enables licensing under less stringent rules than large craft.

The hydrogen-powered, twin-motored craft is under construction, but the London airport and the airline to be involved are as yet un-named.  ZeroAvia said that “The deal sets a solid timeline for the launch of the first zero emission commercial passenger flights between the UK and the Netherlands, and potentially the first international commercial operation in the world.”

These initial flights are a set of shakedown cruises to determine whether a hydrogen infrastructure can be put into place at the two airports while promoting carbon-free flight between the two countries.  Sergey Kiselev, Head of Europe at Zeroavia, said: “This deal means that, in just three years’ time, you should be able to board a flight and make the hour journey between the UK and the Netherlands without worrying about the impact on the climate.

“Working with partners like Royal Schiphol Group, we are making true zero emission flights a reality for passengers in the first half of this decade.”

Alaska Airlines and ZeroAvia are working on a major step up – the conversion of a 76-passenger DeHavilland Q400 aircraft to be fitted with ZeroAvia ZA2000 motors, part of an engine family capable of producing 2,000 to 5,000 kilowatts (2,682 to 6,705 horsepower).  The aircraft will have a 500-mile range, sufficient for many Alaska regional routes.

One of five steps Alaska pledges toward achieving “net zero” by 2040.  As explained by Diana Birkett Rakow, Vice President of Public Affairs and Sustainability, all steps are aligned with the Airline’s The Climate Pledge:
1. Operational efficiency
2. Fleet evolution
3. Sustainable aviation fuels
4. Emerging technology for electrified propulsion, and
5. Credible carbon offsets. 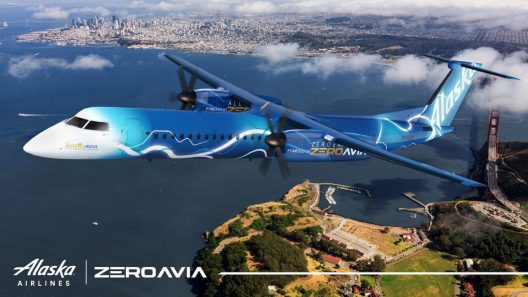 Alaska will begin converting its regional aircraft to hydrogen-electric power with up to 50 kits from Zero Avia.  A workshop facility in Seattle will probably be the center of such operations.  As ZeroAvia reports, “This pioneering zero-emission aviation rollout will be supported by the ground fuel production and dispensing infrastructure from ZeroAvia and its infrastructure partners, such as Shell.”

Val Miftakhov, CEO and founder of ZeroAvia, explains, “The aviation industry is one of the hardest industries to decarbonize; however, with this collaboration, we are one step closer to achieving our goal of making our skies emission-free. We are thrilled to see Alaska taking the lead to implement clean technologies into their operations and look forward to putting boots on the ground with Alaska’s team.”

Further, Faster, and Higher with Mitsubishi

As explained on their web site, “MHIRJ is the merging of two important heritages: Mitsubishi Heavy Industries (MHI) and the CRJ Series program from Bombardier.”

ZeroAvia and MHIRJ will collaborate to certificate electric powerplants and hydrogen fuel systems under Part 33 rules governing aircraft.  This will expand to development and installation of ZeroAvia systems in other aircraft as part of, “A green retrofit program for regional aircraft.” 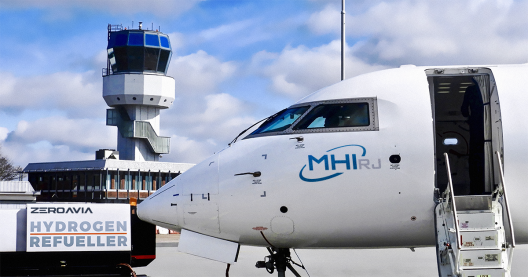 ZeroAvia and MHIRJ will team up to produce larger, H2-powered regional jets

ZeroAvia now works to convert a 19-seat Dornier 228 aircraft for first test flights expected in the coming months. Certification and market entry for its 19-seat powertrain by could follow by 2024, “with an eye towards larger aircraft (50-80 seats) by 2026, and regional jets around 2028.”

This is all very exciting and shows that real-world products are being amalgamated into working, green aircraft that could show the way into a carbon-free aviation future.